[Warning: The below contains MAJOR spoilers for the full season of Midnight Mass.]

By now, you’ve seen Midnight Mass, right? Otherwise, you’ve clicked on this post fully expecting to be spoiled on the Netflix horror drama’s many twists and fabulous turns by the unbeatable cast. And honestly, we can’t blame you, given how much love this seven-episode masterpiece from Mike Flanagan (The Haunting of Hill House) has been getting since it dropped on September 24. 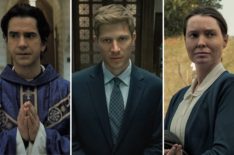 'Midnight Mass': 5 Details You Might Have Missed in the Netflix Series

The raves are plentiful and well-deserved. The insidiously haunting tale of an isolated island community held sway by an enigmatic priest (the revelatory Hamish Linklater) has everything you’d want, especially during the spooky season. Great jump scares. Unsettling portraits of faith run amok. Performances to die — and come back to life — for. And an “angel” none of us will be praying to anytime soon.

“It’s intense, right?” agrees Annabeth Gish, who plays Crockett’s resident doctor, Sarah Gunning. As one of the few locals to realize the new man of God in town has one hell of a secret, the effortlessly graceful Hill House alum, along with Kate Siegel‘s expectant mom-to-be Erin Greene, provides the heart amid what turns out to be an unspeakable terror. Together, these two women lead the charge to stop a catastrophe of almost biblical proportions while also representing the kind of hope for humanity that we could use more of these days. It is also Gish’s Sarah who is connected to one of the plot’s biggest revelations, which only makes her journey in Midnight‘s final hour all the more gut-wrenching (TBH, we legit screamed). And because we just adore Gish, it was imperative to speak with her about Sarah’s outsider status, working with Flanagan again, and the love she has for this character. Of course, we tried to avoid spoilers as much as possible but Mass is fully out there now, so don’t shake your fingers at us if you’re not entirely caught up.