The Price is Right host Drew Carey has opened up about the CBS game show’s former producer Mike Richards and whether or not he can make a comeback following the recent controversies.

Appearing on a recent edition of Daily Blast Live, Carey said that he believes Richards will have a “really good second act” once the heat “dies down.” In August, Richards stepped down as host and executive producer of Jeopardy! following backlash for insensitive comments he made about women and others on a 2013 podcast. He was also removed as Wheel of Fortune‘s exec producer.

“He’s going to need some time away from the storm of it all, you know, and then once that dies down, absolutely, he’s young and he’s very talented,” said Carey. “He’s a great producer. There’s no doubt about that. His producing skills are amazing, and he’ll have a really good second act, let’s say, or third act whatever you want to call it, and hopefully, he’s going to have a good future ahead of him.”

Carey added that he “can’t defend the podcast thing that he did” but stated that Richards “was a really good producer on The Price Is Right.”

Following Richards’ departure as Jeopardy! host, The Big Bang Theory star Mayim Bialik stepped in to helm the daily syndicated show. Bialik, who was originally only meant to host spin-offs and specials, will share hosting duties with Greatest of All Time contestant Ken Jennings through the end of the year. 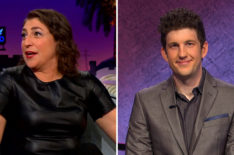 Meanwhile, on Thursday night, Carey hosted The Price is Right Primetime Special in honor of the show’s 50th anniversary. While following the game show’s traditional format, the special also celebrated the biggest winners in Price is Right history, aired never-before-seen outtakes, and included a new game where contestants had to guess the price of products that featured on the show’s early years.

The Price Is Right, Weekdays, CBS