Don’t expect this fairy-tale heroine to stay in her own little corner. A new musical adaptation from Pitch Perfect’s Kay Cannon stars pop sensation Camila Cabello as Ella, who yearns to be taken seriously as a dress designer. Wicked/Frozen icon Idina Menzel is her unhelpful stepmother, and Pose’s flamboyant Billy Porter swans in as the Fab G who will get her to the ball. But even when the prince (Nicholas Galitzine) pitches woo, this Cinderella is more about the glass ceiling than the glass slipper. The cast includes Pierce Brosnan and Minnie Driver as the king and queen and James Corden as a bumbling coachman.

Performing her new album “Happier Than Ever” with each song in sequential order, Grammy darling Billie Eilish glams it up in a concert special from the iconic stage of the Hollywood Bowl with the Los Angeles Philharmonic (conducted by Gustavo Dudamel) in support, along with Finneas, the Los Angeles Children’s Chorus and Brazilian guitarist Romero Lubambo. She’ll also be seen in animated form, taking viewers through a stylized tour of her Los Angeles hometown.

Bitchin’: The Sound and Fury of Rick James

That “Superfreak” Rick James has been gone 17 years, but his musical legend lives on, including in this vivid documentary profile directed by Sacha Jenkins (Wu-Tang Clan: Of Mics and Men) that captures the punk-funk/rock/R&B performer in concert, in colorful archival interviews and in rare home movies. Bitchin’ also features interviews with fellow artists and collaborators who knew the man behind the music.

Serving as an emotional postscript to the tragedy of the 9/11 attacks, a new docudrama stars Michael Keaton as Kenneth Feinberg, an attorney, and mediator who’s chosen to lead the September 11th Victim Compensation Fund. Worth grapples with the difficult question of how to put a price on the value of a person’s life. The impressive cast features Stanley Tucci as a community organizer and 9/11 widower who opens Feinberg’s mind and heart to the enormity of their loss, plus Tate Donovan, Talia Balsam, Laura Benanti, and Marc Maron.

Double the Juno Temple: The fabulous Emmy-nominated co-star of Apple TV+ hit Ted Lasso shows up again on the streamer in a powerful new episode of the dramedy Mr. Corman. In Ted’s seventh episode, Temple’s beloved character of Keeley tries to set boundaries with her hovering boyfriend, Roy (Brett Goldstein), who won’t even let her watch her Sex and the City reruns in peace. (“I can’t forgive them for the movies,” Roy growls, and who can argue with that?) On Mr. Corman, she’s Megan, the ex-fiancée of Josh Corman (Joseph Gordon-Levitt), emotionally reuniting at a fellow acquaintance’s funeral. There’s a lot of unfinished business, some of it musical, to be hashed out — most awkwardly in the presence of her mom (Lucy Lawless).

Bitchin': The Sound and Fury of Rick James 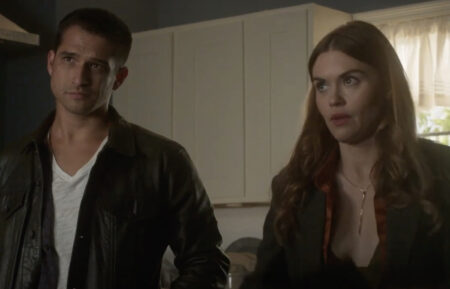