Disney Branded Television is unveiling its lineup of fall and winter premieres filled with new original movies and series for Disney Channel and Disney Junior.

Among the highlights revealed during Disney’s TCA presentation include two new holiday films, Under Wraps and Christmas Again. Meanwhile, the series The Ghost and Molly McGee explores an unlikely friendship between a girl and a grumpy ghost.

And Mickey is bringing some holiday fun to Disney Junior with the movies Mickey’s Tale of Two Witches and Mickey and Minnie Wish Upon a Christmas. Below, see the full rollout of when these titles and more will arrive on Disney Channel and Disney Junior. This film is a contemporary remake of Disney Channel’s 1997 Halloween classic of the same name. The movie follows three 12-year-old friends, Marshall (Malachi Barton), Gilbert (Christian J. Simon), and Amy (Sophia Hammons) as they happen upon and awaken a mummy who they call Harold. Follow the group as they embark on a great adventure and partake in Halloween shenanigans this fall.

An animated buddy comedy, The Ghost and Molly McGee follows optimistic tween Molly (Ashly Burch) who is on a mission to make the world a better place. Meanwhile, grumpy ghost Scratch (Dana Snyder) might be bent on spreading misery but when one of their curses backfires, he finds himself forever bound to Molly.

This family-friendly film sees Mickey tell Pluto a story about two witches-in-training on Halloween. Minnie the Wonderful and Daisy Doozy must pass four tests to graduate from the Witch Academy in Happy Haunt Hills, but will the challenges be too big to overcome? 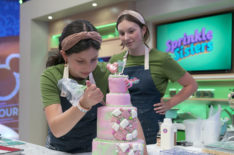 See them take on a 'Descendants' wedding cake in the premiere episode on Disney Channel.

Separated after a series of mishaps, Mickey, Minnie, and the gang are separated all over the world and must try to get back to Hot Dog Hills by Christmas Eve. With a little help from a jolly stranger and The Wishing Star, could they be reunited in time to celebrate the holiday together? Tune in to find out.

High-spirited teen Rowena “Ro” (Scarlett Estevez) is feeling down around the holidays as she grapples with her parent’s divorce, her father’s new family, and wishes that life could return to the way it was. following a disappointing celebration, Ro makes a wish to a neighborhood Santa for a “do-over” that finds her reliving Christmas over and over again. The only way to break to loop is for Ro to learn the true meaning of Christmas and family.

The Ghost and Molly McGee