We’re officially in the final season of Brooklyn Nine-Nine — the first two episodes aired on Thursday, August 12 — and so far, it’s exactly what we needed and expected. And guest star John C. McGinley noticed that, too.

“I think the writers did a smart thing with that eighth season. Instead of trying to reinvent the wheel, they really wrote to the ensemble’s strength,” he tells TV Insider. “They weren’t all of a sudden going to square away stuff that they’d never addressed before with this character or that character. They wrote to everybody’s strength, and you could see the ensemble basking in that and really just crushing it.”

McGinley is recurring as Frank O’Sullivan, the head of the patrolman’s union, and the 99’s latest foil, and he’s having a blast. He tells us more about joining the comedy and looks back on his time on Chicago P.D. as Brian Kelton (the corrupt superintendent who was killed before he could become mayor).

This is the second time you’re playing a character fans aren’t sure if they’re going to love to hate on an NBC series about police after Chicago P.D.

John C. McGinley: I loved Chicago P.D. because it was just unbridled ambition. Every time you see a character, you want to find what’s right or what’s good about the character, and in that one, my friend Eriq La Salle, who I graduated from NYU grad with in ’84 and was an executive producer of Chicago P.D. for Dick Wolf, [and I] just talked about [Kelton’s] unbridled ambition. Whoever you need to step on, step on, and that was really fun not to have to find a good side of someone. [He was] just a guy who wants to be mayor, senator, president, governor. That was the fun part of P.D.

Let’s talk about Frank O’Sullivan. In his first episode, we learn that he only loves three things in this world: his ma, the NYPD, and Billy Joel.

[Laughs] [Executive producer] Dan Goor sent me the script at the height of the pandemic, when we were all podded up in quarantine, and this one came across my desk, and I read the episodes. I thought Frank O’Sullivan was Archie Bunker meets Yosemite Sam, and nothing says McGinley like Archie Bunker meets Yosemite Sam. Then when I found out that Frank O’Sullivan’s a Billy Joel fanatic, still lives in his mother’s house, hosts an NHL podcast called Islanders Talk from his mother’s basement, I wanted to participate. It seemed like there was a lot of slack in that leash to be able to explore a really eccentric character. To tell you the truth, it felt like Frank O’Sullivan to me was a collection of eccentricities that the writers had been sitting on for seven years that they hadn’t been able to channel into a single character, so I think they combined them all and the cocktail yielded Frank O’Sullivan.

It seems like you’d expect multiple characters to stretch over an entire season almost and it’s all in one character and all in his first scene.

I agree. It impacted me the exact same way.

Preview what we can expect from him this season as he and the 99 continue to be at odds.

He’s a classic foil for two or three of the principals in that ensemble, which is watertight and lovely, and the writers had a field day with him not buying into any of what O’Sullivan would call their progressive liberal agenda. The only color he sees is blue. The single parameter is blue, his union members, and I think there was a slippery slope for Dan Goor and the executive producers because of the travesty of what happened with George Floyd and the rise of BLM and that, all of a sudden, when you’re doing a cop comedy, becomes a really slippery slope. I think they straddled that line with grace. 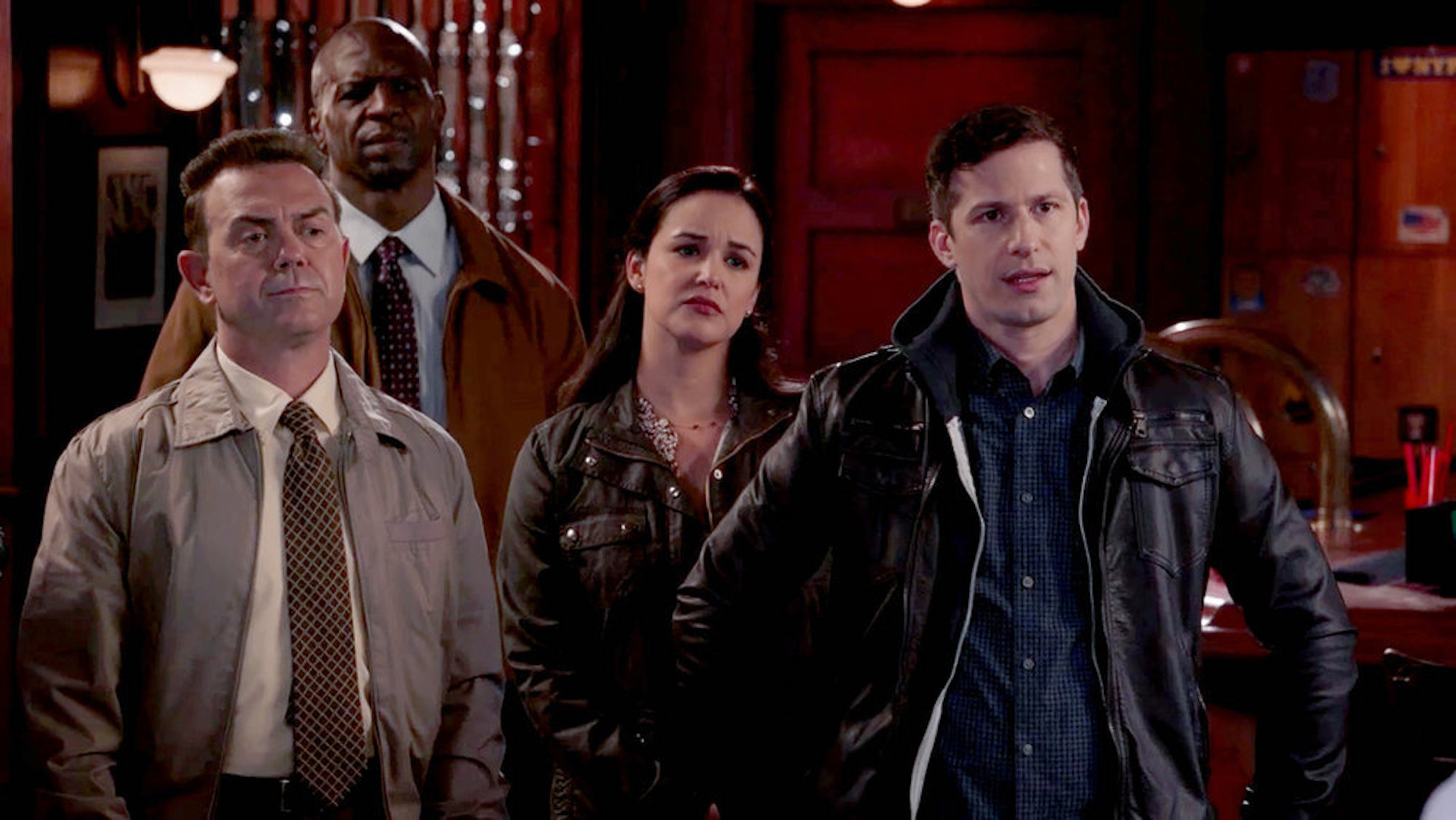 Is there any hope of redemption for him in the 99’s eyes?

What does he think of the 99? Is there any type of respect for them on his part?

Are we going to see him getting involved in any of their antics?

Anything you can preview? Talk about filming because your character is constantly clashing with the 99.

In a half-hour sitcom, when everything’s going 5000 miles an hour, you’ve gotta lean into the page [and what] people like Dan Goor or Dana Gould or Bill Lawrence put [on it]. That’s what you get to do with these guys that have accepted the torch from the Norman Lears and they’re moving this forward. Stepping onto that set armed with these words, I was ready to just go, to fire.

And Frank O’Sullivan is so set in his ways.

Set in stone. Like Excalibur in the stone. He sees blue, that’s it. … This guy’s number one objective, every day when he gets up, is to deliver to the rank and file of the union. When people like Andy and Andre’s characters get in the way, they’re to be squashed.

Right. And some conflicts that Andre and I have are insane. Because Andre’s character is so reasonable and so rational and stuff like that doesn’t work on people like Frank O’Sullivan. Rationale and reasonability, forget about it. … [While filming that], there was no acting. I was so dialed into this thing, and I like to bring it, and Andre, a couple times, was looking at me like I was a zoo animal, which I love. Going back to Chicago P.D., as much as I loathed Kelton, I have to say how much I enjoyed you on there. The Kelton-Voight [Jason Beghe] scenes, in particular, were so good.

I did, too. I’ll confess to you I thought I was going to become mayor — I, John McGinley — and I was really disappointed. I wanted to stay there for a while. I really thought that could be a really fun home for a year or two, and we ended up doing about half a season or so, and that was one of those really good gigs, especially because my friend Eriq La Salle was running it and the writing was so darn tight and that ensemble and Jason and I became friends. I was there when Malibu burned on November 9, almost three years ago now, and we both live here in Malibu. He lost, I think, a barn and something else. Our house had such smoke damage, we moved out for a year, and so that kind of stuff brings you close, and not that we had to be close, but I don’t know. I really got tight with Jason really quick, and we were just going for it every day. That cast and crew work so hard. They do their 13, 14-hour days and then tomorrow, get up and do the same thing. That’s an unbelievable ensemble. I really wanted to stay there for a while, but they had to kill Kelton. Taking into account police reform, if Kelton had survived, do you think he had any chance of remaining in office as mayor or even part of the CPD with the way the world has changed?

I think he’d be running for governor. That was blind ambition. If he got into trouble, he would have just kept climbing. I really believe that. That’s how I squared away with him. Wherever there was trouble, he would go to the next level to get himself out of trouble. That was such a fun creature to play. … I think the writers had a lot of fun with Kelton.