Let’s steal a revival! Nine years after the original 2008-12 TNT series ended, the Leverage team is back with a new season. The first eight of sixteen episodes drop on Friday, July 9 on IMDb TV (pssst… you can watch for free by downloading the IMDb TV app or watching on your Prime Video account). The criminally good series follows a group of Robin Hood-type thieves who use their special skills to even the scales of justice for people getting steamrolled by the rich and powerful. While revivals of long-gone shows often fall flat, failing to recapture the magic that made them great (Gilmore Girls: A Year in the Life, Veronica Mars season 4), Leverage: Redemption slips easily back into its skin and is a total blast.

Though the team is down a “Mastermind” — Timothy Hutton is the only regular not returning, and the show picks up one year after his character Nate Ford’s death — the other members, composed of “Grifter” (and now widow) Sophie Devereaux (Gina Bellman), “Hitter” Eliot Spencer (Christian Kane), “Thief” Parker (a delightful Beth Riesgraf), and “Hacker” Alec Hardison (Aldis Hodge, only recurring due to a busy schedule), still have their old chemistry as they rib each other and come up with insane heists. Just as impressive, the show seamlessly integrates new characters “Fixer” Harry Wilson (Noah Wyle), a long-time lawyer for the bad guys now trying to make things right, and “Maker” Breanna Casey (Aleyse Shannon) subbing in as hacker for Hardison, who brings some added engineering skills, and a hipster Gen-Z vibe. Completely on point with the humor, the series features long-running jokes from the original (the whole team looks at Sophie expectantly in the first episode waiting for her to give the iconic “let’s steal a…” line), and specific character traits are gleefully highlighted, like Parker doing her “Parker” thing by crawling through vents and magically stealing shiny things, including the world’s largest pearl in one episode. Admittedly, the episodes that don’t have Hardison suffer without his charm, adorable geekery, and Hodge’s deadpan way of delivering positively hysterical lines (“Don’t be ridiculous man, if there were stolen masterpieces they’d be in that closet” cracks me up every time I think of it).

The show also doesn’t forget to have fun with the fact that it centers around a group of criminals. These are the type of people who might decide to rob a museum just to get a friend — Sophie, depressed after Nate’s death — out of a funk. Parker admits that she spent time teaching a young Breanna to do crime because “crime is fun.” And newbie Harry fits in perfectly with the cynical mindset of a group that’s seen the worst of humanity and is never surprised by just how deep corruption runs.

Leverage is also not oblivious to the political climate it’s returning to. In an age where people are very much aware of how hard it is to affect change, and for the powerful to be held accountable (hello, Bill Cosby), the idea of a team that can provide “leverage” for ordinary people is an attractive and comforting one. The team goes after eerily familiar villains, like a company price gouging a specific medicine they know sick people need to survive. 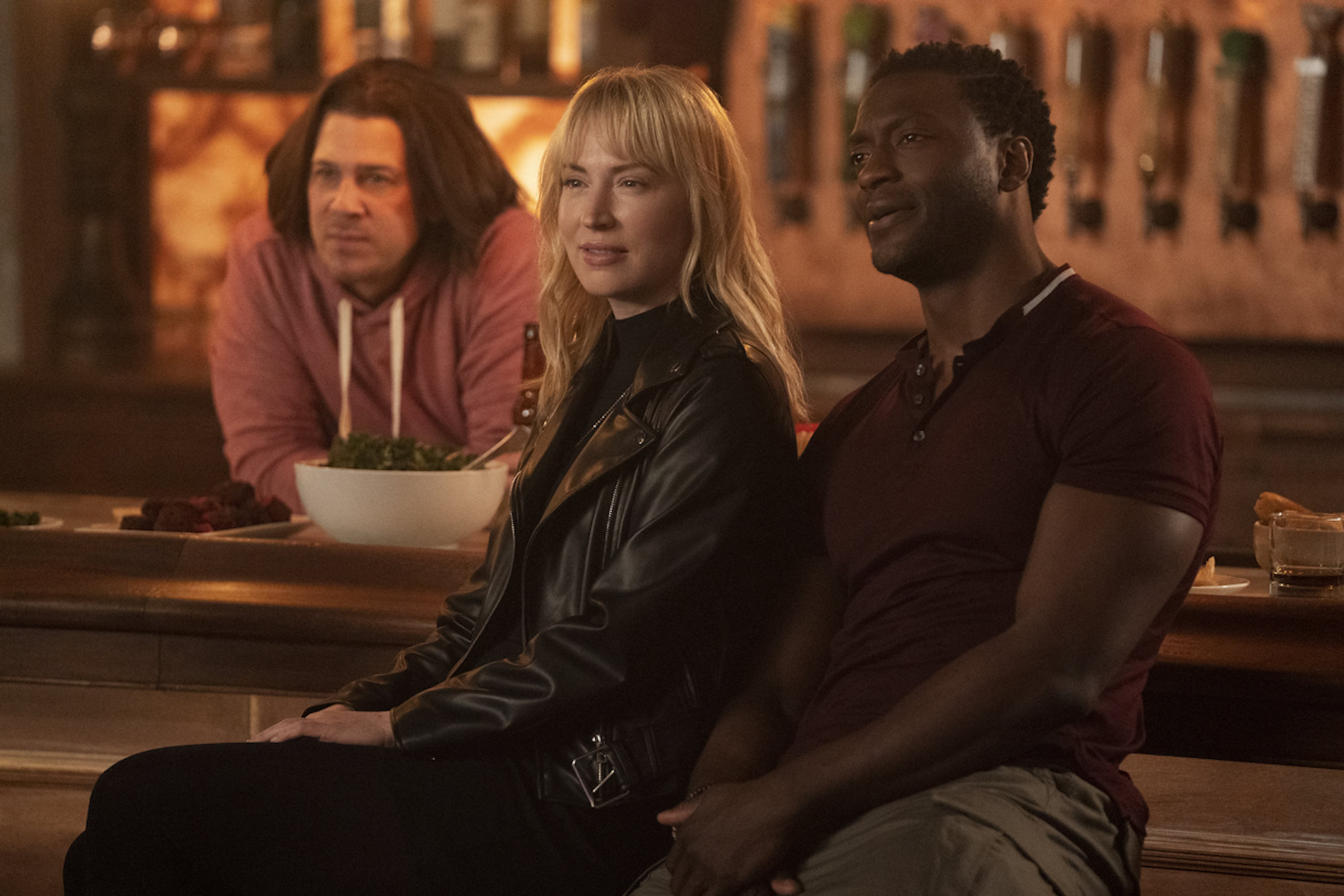 Perhaps the best episode aside from the premiere is the Halloween-themed fifth episode, which focuses on the women of the group as they try to help a neighbor who seems to be the victim of something more sinister than a Halloween prank. The entire episode takes place in the team’s New Orleans headquarters, and the ins and outs of the high-tech, decked out in spooky decorations lair is used to excellent effect, as Sophie, Parker, and Breanna have to improvise to get the better of a twisty situation.

It’s a little unclear how Eliot and Parker have time to devote to their own heists considering they, along with Hardison, run Leverage International, which has a dozen teams in the field, but this is TV so might as well suspend your disbelief. While we may often groan whenever we hear of yet another revival or reboot, the truth is that all is forgiven if it’s done well, and Leverage: Redemption is. Whether you’re a fan of the old show or are new to these do-gooder thieves, you should be able to jump right in and enjoy watching some bad guys get their comeuppance. You may even start to wish there was a Leverage team in real life.