‘Bosch’: The Evolution of Jerry Edgar and Maddie Over 7 Seasons

Titus Welliver’s Harry Bosch witnessed two of the most important people in the homicide detective’s life reach a crossroads. A daughter in Maddie and a long-time partner in Jerry Edgar.

TV Insider chatted with stars Madison Lintz and Jamie Hector respectively to talk about their Bosch journey during the Amazon series’ seventh and final season.

Maddie was inadvertently put into the crossfire of a hitman during a case investigation. One that left her mentor Honey Chandler [Mimi Rogers] shot and fighting for her life in the hospital. Ultimately, a shootout in the parking lot of a courthouse followed. The experience further motivated Maddie to follow her dad into law enforcement.

“It was a shock to me,” Lintz said, upon reading the script. “I just thought she was just going to be a prosecutor. That was fine with me. I thought it was incredible and loves Honey Chandler. That would have been a really great path for her. Deep down, I always hoped she would become a cop. On my Pinterest board for Maddie Bosch, I feel like I manifested it a little bit. Just kidding. It was the incredible writers and producers who decided that. It felt like a surreal moment filming the scene.”

The actress believes Maddie also came to the realization that things happen to the people in her life that were out of her control. Becoming a cop is a way to bring change.

“Being a prosecutor is not enough. I have to get closer,” Lintz added. “In a way, that is very valiant and a testament to who her father is and who she is. They are protectors who do the right thing. In other ways, it is how she has dealt with her own grief.” One of the most emotional scenes comes when Madie opens up to her boyfriend Antonio (Jonny Rios). She breaks down about missing her late mother Eleanor (Sarah Clarke), a former FBI agent who was murdered years prior.

“I think what happened to Honey opened up a lot of that,” Lintz said. “Her mom died when she was 16 or 17. That is hard and dealt with the best she could. Now that she is an adult, it spurred out an opening of grief, which was necessary for her to deal with it in an adult way.

Maddie is making moves, literally, leaving dad’s house to share a place with her boyfriend. She meets Harry at Musso and Frank to tell him the news of her career aspirations.

“What I don’t think Maddie realizes is she is becoming more of her own person,” Lintz said. “She is becoming her father’s daughter, but becoming her own person is making these decisions without telling anybody. That shocks Harry a little bit, which is funny to watch. It’s part of growing up. I think she wanted him to be excited but understood how the news coil is jarring.” Lintz was delighted to find out Maddie’s story is just beginning with the not-yet-titled Bosch spinoff on the horizon. She is grateful to spend the summer months working on the project, as well as further digging into the role.

“One of the things I love about Maddie is she has grown up in that world. She knows the darkness. She has seen what happens to people in law enforcement, yet chooses to go into it anyway. I’ve been working with (real detectives) Mitzi [Roberts] and Tim [Marcia] the last couple of months. They are on set.

“I’ve gained so much from them and they are so much about what they do. Being able to experience and learn and sink your teeth in a different profession for the sake of your own profession is the craziest thing ever. I’ve been watching bodycam footage on YouTube. I watched End of Watch with Jake Gyllenhaal because a few producers told me that was a good one to watch. It has been an incredible experience. I find it so fascinating all the facets of the job. I just want to portray it as real as possible. That is my main angle for all of this. I want to do it justice.”

Jerry Edgar and His Internal Struggle

Jerry is still deeply affected by his decision to fire on and kill Haitian drug kingpin Jacques Avril (Treva Etienne). Did he let revenge get the better of his judgment? A question that leads to the normally straight-laced J. Edgar to unravel, looking to the comfort of strippers and nicotine to ease the pain. It’s impacting not only his personal life but compromising cases as well.

“Sometimes it’s not what you affect. It’s what affects you,” Hector said. “Him grappling, having to take a life. Even though that person was on the other side of the law, it’s showing up at his doorstep. It’s affecting him emotionally, physically, mentally. He always has his suit tailored and ready to go.

“There are people who experience what he goes through in their lives. There is still hope for him and there is still another day. Hopefully, it can show other people that it’s very possible to get beyond your hurt with time and support and seeing the world a little differently.” Jerry lets his emotions get the better of him during questioning, which puts Maddie in danger. He ends up being the saving grace at the courthouse, helping stop the hitman and providing some kind of redemption. It was also a wake-up call Harry wanted him to have long before the incident. Though for Hector, Jerry remains a work in progress.

“He doesn’t want the responsibility of having lost another life based on the choices and decisions that he made. And not just another life, but someone who is like another daughter, Maddie,” he said. “For him to be the one who almost causes her death because he couldn’t keep his mouth shut. The fact Harry and everyone almost lost their lives in an ambush, which would have been because of him. He knew what he needed to do. This all also pulls him out of that dark abyss. Knowing if he stayed in that place things will only get worse if he keeps making these foolish moves.”

With Jerry reassigned to RHD (Robbery-Homicide Division) and Harry going private, the series finale marks the end of an era for this partnership. Hector’s focus is now on his next project We Own This City where he’ll play Sean M. Suiter, Baltimore, well, a homicide detective. In Hector’s eyes, the job is similar but the role is someone new. 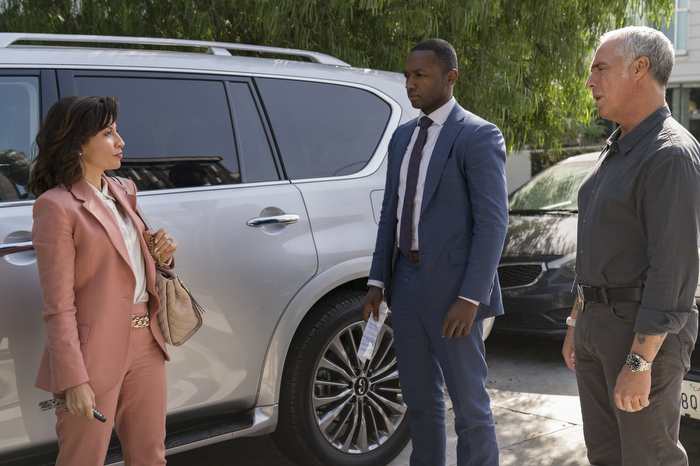 “You’re dealing with different people. It focuses on the rise and fall of the Baltimore Police Department’s Gun Trace Task Force. They are both detectives but it’s really about the human behind the profession. It’s about the ups and downs, the ins and outs. It’s not just about solving a crime, but how he solves the crime. How he thinks and sees the world and impulses. My approach to this new character is to understand who he was and not judge him, but express him as best I can.”

The project will see him reunited withThe Wire EP David Simon and producer George Pelecanos. Hector enjoyed the wink to the show when Jerry revealed to be a fan.

“I called my family and said, ‘Listen to this line.’ It really brings it back,” he said. “Shout out to Eric Overmyer and Michael Connelly for having that into the script, our showrunner, and executive producer. Eric also worked on The Wire as well and we knew each other, so to bring that into it here in the last season of the season, I loved it.”

Thanks to the IMDB TV spinoff, this isn’t the end of Bosch’s story. And Hector isn’t entirely sure it’s the end of Jerry’s either.

“I’m looking forward to that call one day because come on, it’s Bosch,” Hector said. “It would be fun to play in that sandbox again.”