‘The Voice’ Champ Cam Anthony on What’s Next: ‘Expect a Lot of Interesting Things’

The Voice crowned its 20th winner during the Season 20 finale, which also served as a 10th-anniversary celebration for the NBC series.

It was a big night for 19-year-old hopeful Cam Anthony, who won the competition after several weeks of hard work and plenty of showstopping performances. Originally from Philadelphia, this singer previously made a splash on TV when he went viral at the age of 11 and made an appearance on The Ellen DeGeneres Show.

Plus, find out which former coach stopped by for a special visit.

Over the years, Cam performed at the annual Easter Egg Roll at the White House during the Obama presidency and signed a recording deal with Dr. Dre at the mere age of 12. Now, he’s ready to take control of his career and made quite an impression on America with his run on the competition series. Below, Cam is opening up about his experience, working with coach Blake Shelton, and making connections with his fellow performers during Season 20.

How are you feeling after that big win?

Cam Anthony: I am feeling amazing. I’m just taking it all in. I got to speak with my family, had some tears yesterday, of course. I really feel like I was able to just be myself completely on the stage in an industry where that’s not necessarily always welcome, so I feel amazing. Are there any special plans to celebrate your win?

Yeah, my family actually, since they’re on the East Coast, we’re trying to get together as soon as possible to be able to just enjoy each other’s presence. We’ve all had to change our lives, not just me, [and] work around this entirely new life. So I think we’re just going to take our time to really be careful.

You had the chance to perform with your coach Blake Shelton in the finale. What was it like preparing for your “She Drives Me Crazy” duet?

That was quite a fun experience. Blake is very down to earth and he has been true to what you see is what you get [with him]. He’s very funny and so enjoyable to be around. He’s just a kind person as well. So it made that experience well-working honestly. I keep saying this was a divine situation where he and I were paired together because it really was. I didn’t put that together. So I’m just extremely grateful to have been able to share the stage with him.

Prior to The Voice, you’ve had some once-in-a-lifetime experiences such as performing at the White House and appearing on The Ellen DeGeneres Show. Would you say those experiences helped you prepare for The Voice?

I would say there were a lot of things over my entire life I feel that prepared me for this moment. I would say even the quarantine definitely got me ready and forced me to really look at those dark spaces in my life and also the beautiful things that I wasn’t. And so now that’s been the main thing, just really learning from my experiences and then experimenting on what I’ve learned. This was a test of how much I actually was able to learn over this time. So I would say all of those experiences were training me to become the artist I am today. Is there any lesson you’ve learned or will take away from your experience with The Voice?

For sure. I would say authenticity is key. The most beautiful thing I witnessed here was how different we all were. We were all such different individuals, but to be able to share this environment with them and get to know them like working with Emma Caroline was the most amazing experience ever. She is such a kind and such a beautiful soul and just being able to get to know her story. We found so many things that we could relate on and I feel like that’s what made our bond and our duet that much better. Building connections and true relationships off of authenticity are key and it creates a strong and unbreakable foundation.

Considering this season was different than past ones due to COVID, were you still able to connect and bond with your fellow contestants despite the health and safety protocols?

We’ve definitely had to adhere to the guidelines, but there were definitely ways for us to connect. The team at The Voice made sure that we had Zoom calls. We would go watch shows together. We would play games on Zoom together. And when we were able to be socially distant, we would be outside and hang, we would play Frisbee. So, we definitely had really great times to just enjoy each other. Jordan [Matthew Young] was the one who brought the Frisbee… It was like a college campus [Laughs]. 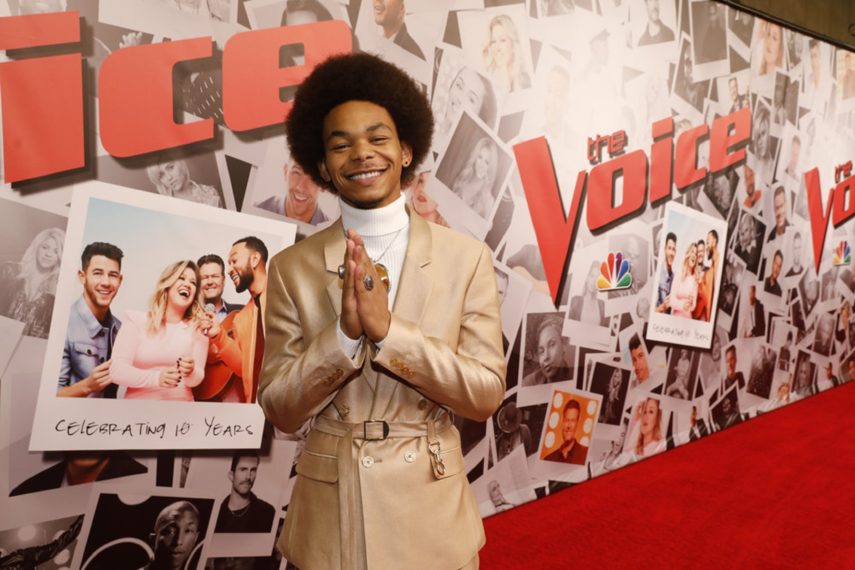 How do you hope to inspire future contestants with your experience?

I can’t even imagine anyone else coming to this competition and not having this amazing, loving, and extremely positive experience that I had during Season 20 because it’s life-changing. And so I just want to encourage them all. It’s going to feel uncomfortable and some of you may be shy, I was shy in the beginning, but be sure to get out there and make friends with your other contestants, because it’s definitely going to make this experience that much more worth it. And you’re going to gain some lifelong friends and you’re going to need them when you go on to do the big things that you want to do. So just trusting your heart is the main thing.

Speaking of the future, do you have any special plans for your music?

I definitely want to start making or releasing music. I want to be able to tell stories in [any] way I can. I like to write poetry. I like to write short stories and I just want to be able to explore my artistry and continue to do that the same way I’ve been doing on the show. So you can expect a lot of interesting things coming your way for sure.

The Voice has a fantastic fanbase. What kind of support have you received from the viewers this season?

The support has been overwhelming. The messages that I have been seeing, I teared up a few times this morning because people have been telling me the reasons that they look up to me. That’s why I look up to John Legend or look up to people like Michael Jackson. I respect the grace that John carries himself with and I’m only looking to be able to embody that. I am just so grateful that I can even have that opportunity to influence people.

I know we spoke about your duet with Blake and you talked about singing with Emma Caroline, but are there any performances or moments that you consider the most special from your experience with the show?

Well, I definitely had one moment yesterday actually during our rehearsal. I almost fell off the stage, but it was a funny little thing. I caught myself and just kept performing but Blake and I were laughing hysterically afterward. But I will also say my heart was the fullest at this rehearsal that Emma and I were doing, and we started singing “The Climb” by Miley Cyrus. It gave me chills. I set up the camera real quick to record it (see it above). It was definitely an amazing moment for sure.