[Warning: The below and above contain MAJOR spoilers for the Season 10 finale of NCIS: Los Angeles, “False Flag.”]

In addition to bringing back David James Elliott as Harmon “Harm” Rabb in the penultimate episode of Season 10 and Catherine Bell as Sarah “Mac” Mackenzie in the finale, NCIS: Los Angeles brings back the familiar sounds of the JAG theme when each first appeared on-screen. 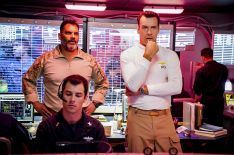 The actor reveals how Harm has changed.

First, Sam (LL Cool J) and Callen (Chris O’Donnell) travel to the USS Allegiance to investigate a threat and meet with the ship’s XO, Harm. Then in the finale, Hetty (Linda Hunt) recruits her old friend, Mac, to liaise with a Russian diplomat.

Though there isn’t much time to spend on their personal relationship, viewers do receive an update on Harm and Mac’s romantic status — and it isn’t a positive one.

Click through the gallery above to see Harm and Mac’s best moments from the last two episodes of Season 10.