Captain Kathryn Janeway completed her mission and brought her crew home 20 years ago when Star Trek: Voyager ended its seven-season run on May 23, 2001.

Now that the UPN series has been off the air for two decades, we’re taking another look at the ten episodes fans loved the most—as identified by ShowSkimmer—along with some IMDb reviews singing those episodes’ praises.

(Oh, and don’t think actress Kate Mulgrew has left her Starfleet days behind her: The actress is reprising the role of Janeway in the upcoming animated Nickelodeon show Star Trek: Prodigy.)

Here, in chronological order, are those 10 top-voted episodes—including that series finale!

The 11 Best Sci-Fi Series Catchphrases & One-Liners, aka Trivia You Didn't Know You Knew

The enemy of my enemy is my friend? Captain Janeway strikes an uneasy alliance with the Borg to defeat an even more menacing alien species, Species 8472. On IMDb, one fan calls this Season 3 finale “arguably one of the best episodes out of the series.”

Seven of Nine (Jeri Ryan) makes her Star Trek debut in this Season 4 premiere, in which the fan-favorite character serves as the go-between for the Voyager crew and the Borg. “The thrust and parry of this episode make it the best so far,” a viewer wrote on IMDb.

Talk about revisionist history! In the first half of this two-parter, Krenim scientist Annorax (Kurtwood Smith) develops the power to make changes to the space-time continuum, threatening to wipe the Voyager out of the timeline. “The episode is great, both in its depiction of a ravaged Voyager and for introducing a villain who appears to have some depth and character,” one fan wrote.

In the second part of “Year of Hell,” Janeway plots to use Annorax’s weapon against the Krenim, ramming the Voyager into the enemy timeship to reset the timeline. “I would love to see, now at the end of 2020, a Star Trek episode or even something else so good,” one Trekker said in a recent IMDb review of the episode.

Speaking of restoring timelines, this episode depicts a bleak feature in which surviving Voyager crew members plot to send a message 15 years into their past to avert the starship’s cataclysmic slipstream accident. But Next Generation’s Geordi La Forge—played by guest star LeVar Burton—has something to say about those plans. An IMDB review called this installment “a perfect Trekepisode.”

A backup version of the Doctor (Robert Picardo) sets the record straight seven centuries in the future after a museum portrays the Voyager crew as war criminals. “Hands down my favorite Voyager episode,” a fan reviewer said.

Seems like time-travel episodes are popular among Trekkers! In “Relativity,” a 29th-century starship captain recruits Seven of Nine to locate an explosive temporal disruptor onboard before it destroys the Voyager. “All in all, an interesting and exceptionally written episode all round,” one devotee raved.

In the Season 5 finale, the Voyager comes across another starship, the Equinox, the skeleton crew of which has gone to sadistic lengths to soup up its warp drive. “This was a gripping episode which left me looking forward to seeing the conclusion when Season 6 begins,” observed one Trekker.

The Voyager enters the orbit of a planet subject to time dilation, allowing the crew to witness eons of the world’s history, while the humanoids on the world’s surface create a mythology around this “sky ship.” An IMDb user called this installment their “favorite Voyager episode ever made.”

Let’s do the time warp again! In the series finale, a much-older Janeway, now the rank of admiral, flaunts Starfleet directives and tries to change history to get her Voyager crew home sooner. Of course, that means coming face to face with her younger self. “This double-length show is among the best in the series—something very rare for any finale,” an impressed fan wrote on IMDb. 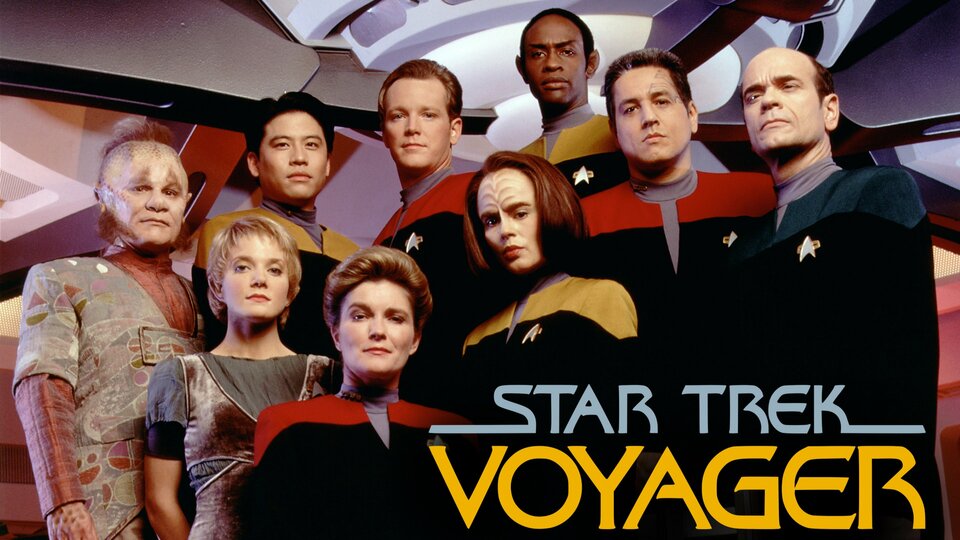 Star Trek: Voyager where to stream