How the ‘NCIS’ Team Will Meet Katrina Law’s Jessica Knight

NCIS is getting some fresh blood that could be sticking around now that we know the CBS procedural is coming back for Season 19.

As previously revealed, Katrina Law is coming in for the final two Season 18 episodes as REACT Special Agent Jessica Knight. At the time of the casting, it was said there’s a possibility she could become a series regular next season. Now, we have the first details about what to expect from her debut in “Blown Away” on May 18. “[Law’s] character has a very interesting kickoff,” series star Wilmer Valderrama (who plays Special Agent Nick Torres) told TV Insider. “Her energy just fits right in and we’re having a lot of fun. Both of our characters have a lot of interesting dynamics and energies and philosophies [in common], so I think these two characters are going to have fun in the field as well.”

Law joins NCIS after already appearing in a show that is tied to the universe. She played Quinn on Hawaii Five-0 (below) in its final season; H50 crossed over with NCIS‘ Los Angeles spinoff. 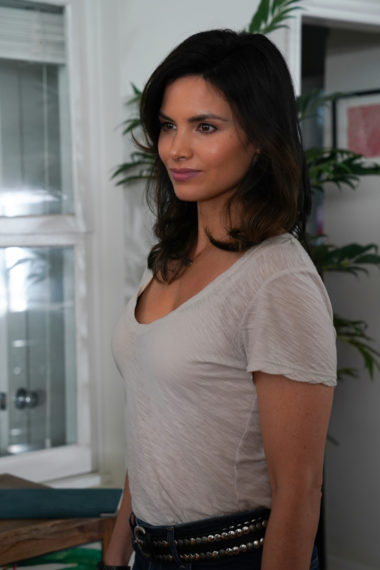 Law’s second episode comes in the season finale, which Valderrama promised will “really absolutely blow everyone out of the water. It is absolutely the season finale that the fans deserve and I promise you there will be absolutely no way anybody can predict what’s going to happen. … The writers did an incredible episode to pay tribute to all the questions that people had from Season 17 to 18 and then really kick off the 19th season.”