[Warning: The below contains MAJOR spoilers for Debris Episode 9, “Do You Know Icarus.”] Fans may start questioning if Pip's Anson is the bad guy after Episodes 5 and 6.

In tonight’s just-aired episode, “Do You Know Icarus,” solder-turned-CIA agent Bryan and his Orbital partner Finola Jones (Riann Steele) tangled with a young man using a submerged piece of Debris to find the sister who’d been erased from existence by the alien particle.

As the hour played out, it was revealed that the debris allowed him to reset reality and that he’d already encountered the pair—as well as Finola’s recently resurrected father George—but that every time he “reset” the timeline, the fabric of reality was slightly changed and corroded a bit more.

The reality-shifting concept allowed for some interesting peeks into the Bryan-Finola dynamic now that they have united against their manipulative handlers on both continents. It all culminated with a brain-breaking cliffhanger that saw an unsuspecting Finola still working an MI-6 desk job back in London while alt-Bryan handled the case with a different partner…and the haunting knowledge that he isn’t in the right dimension. At the episode’s end, he placed a call to Agent Jones to clue her into what had gone down, ultimately confessing that he was desperate to get back to somebody who was very important to him: Finola, herself. Obviously, we had questions! Thankfully, Tucker is one of the most thoughtful talents of his generation and had some answers for us that went beyond the general “just wait and see.” Which, of course we will, because next week’s episode sounds even more incredible.

OK, this episode gave us a lot to take in. They introduced Garcia, a character Bryan has referenced before.

Jonathan Tucker: Yes. I don’t know if it’s a spoiler or not as to who he is, but it’s definitely somebody…I have worked with this person before.

And clearly, you were both affected by something in the debris.

That is correct. Right.

It’s interesting that we’ve seen Bryan giving himself injections, and tonight, he tells Garcia that he still takes the shots “when they send them,” which makes me think someone is controlling your destiny.

Wow, you are on it. Christ, you’re the only one I have talked to who picked up on that. Yes, you are dead-on.

And the writers are doing a great job of making us feel bad for Maddox (Norbert Leo Butz), who is clearly a bad man, because of what he has going on at home.

Maybe. You will find out…um, I would say let’s leave that question open. OK? Good to know! Now, this is not the first time this season that we had seen two Bryans. And there are theories out there, especially after finding out that Finola’s dad was re-animated by Orbital. My theory is that Bryan was reanimated and that is why he needs the shots. You don’t have to tell me what is happening with him, but when did you find out what’s actually going on with him?

Well, [showrunner] Joel Wyman and I sat down to talk about this whole opportunity back in January or February of 2020, before doing the pilot. He walked me through what the season looks like and these were two episodes he was really excited about. I think an important thing to circle here is that these two episodes really underscore the challenge of the show. They [showcase] Joel’s understanding of sci-fi and how he is seeded ideas or questions, watered them consistently over the course of now nine and 10 episodes, and then allowed them to start to grow. And we’re seeing that the fruition of that.

It also highlights the challenge of our co-EP and directing producer, Paddy McKinley. These are two episodes we cross-boarded and shot at the same time. He block-shot almost all those scenes where there’s multiple [versions of reality]. And this is a whirlwind, a behemoth of a task to put on the shoulders of a director. Oftentimes, TV directors can kind of be the forgotten heroes, and in this case, we are talking about the single-most complicated episodes of network television I’ve surely been a part of—everybody I’ve spoken to who was involved in the production and have more experience than I do in television have also confirmed that—and he did it literally flawlessly.

Also, there were no pickups or reshoots. There wasn’t a single mistake, technically or in regards to the emotional beats. The amount of pre-production work that Padraic McKinley had to do to execute this without a single mistake, and come in ridiculous under budget, really shouldn’t go unnoticed. It was like a true Matador slaying the ultimate bull. And it’s the ultimate setup for what becomes a slam dunk at the end of the first season from Joel. Because we’re with alternate universes or alternate realities, there was a Three-card Monte feel to the hour. If you are not paying attention close enough, you don’t know who you might be dealing with.

That’s right. And again, just to highlight one more time, that was the case on the day, the amount of attention that had to be paid from the actors and from McKinley, the director. That level of attention was as serious to us as it is to the audience watching it, because if you take your eye off it for a second, then we would have been in a major problem.

I love the idea of this allowing Bryan and Finola to almost reset their own relationship. They have created this strange alliance against their own handlers, but there’s still a level of mistrust between them. This version of Bryan reaching out to a Finola who’s never met him actually gives him a chance to basically start over.

That’s exactly right. And, you know, having my own kids and seeing the way that they toggle so clearly and so profoundly between different emotional states was incredibly helpful in looking at this episode. Particularly the scene where I realize that I am the same Bryan in another dimension. That sense of disorientation, of frustration that I can’t muscle out a solution, that sense of abandonment, that is all something that I see clearly in my twins.

He has the sense of not having a home…I can’t find a home. And here’s somebody who is equipped with all of the tools of an elite Marines Special Forces fighter and yet this, I can’t wrap my mind or my heart around. When he says to Finola that the person that he’s desperate to get back to is her, that she is very important to him, that didn’t read as a romantic confession at all. I read it as almost like she is an emotional anchor back to that home.

Exactly. It’s the embrace of mother or father or friend. It is the anchor that makes us feel like home. She equals going home.

And all along, she is literally the only person who has made him feel comfortable in this world.

Yep. That’s absolutely dead-on. And to the credit of not just Joel but also the network, they have allowed us to reveal and unravel the characters over the course of now 10 episodes, not forcing our hand to make all of that so clear within the pilot and the next two episodes.

So in the next two episodes, how much time do we spend in this newly shifted time-space?

I think we continue on in this, in the back and forth of the dimensions. And I think [these episodes] sends them off— finally as true partners—into finishing their mission. This is really the crucible that melds them.

Last week, I tweeted about the significance of the chain Bryan wears around his neck…

Uh, yeah, that’s private but we’ll find out…maybe in Season 2 we’ll get into that. Between me and you, I will never be wearing anything that isn’t important. Finally, you and Riann have mastered the art of acting in vehicles. Whether it’s a plane or a car, you two have figured out how to make the most of those moments as scene partners.

[Laughs] It’s really a lot of fun. I’m really looking forward to being able to do [those] in Season 2 with the emotional openness I think we’re going to get from Bryan with Finola. I think it’ll open up those private moments so they can be a lot more intimate and fun, yeah. But we have a great time and we love that car. Like Riann and Tuck, literally loved the make of that Ford, we’re like obsessed with the car. I even rented that car for Christmas break with the kids in the family, when I went up to Pemberton and I loved the car even more when I came back here. [Laughs]

That’s amazing. Those scenes really do feel like it’s just you two getting to do what you do best without the bells and whistles of action and effects and all that stuff.

I’m so glad you like them because we love them even more. 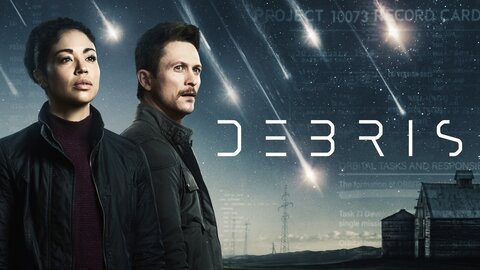 Debris where to stream