[Warning: The below contains MAJOR spoilers for the Season 6 premiere of 90 Day Fiancé: Happily Ever After?, “Be Careful What You Wish For.”]

As we’d expect from the 90 Day Fiancé franchise, the drama pretty much starts almost immediately for the married couples in the Season 6 premiere of Happily Ever After.

From arguments about surgery and where couples will live to family issues, things are off to a rough start when we pick up again with Angela Deem and Michael Ilesanmi, Kalani Faagata and Asuelu Pulaa, Elizabeth Potthast and Andrei Castravet, Mike Youngquist and Natalie Mordovtseva, and Brandon Gibbs and Julia Trubkina in the April 25 episode.

Due to COVID, Angela hasn’t seen Michael, who’s back in Nigeria, for seven months; her mother got sick (and then died) soon after their wedding so she had to fly home to the United States. They’re now waiting for word on their spousal visa application.

The distance isn’t keeping them from arguing, this time about her weight loss surgery because he’s against it. For Angela, who has been gaining weight during their time apart, the surgery will make her happier and healthier, so she can be around longer for her grandkids and Michael.

But Michael and his family think that Angela should be focused on making him a father (and perhaps save the money from the surgery for a surrogate). If there aren’t kids in their future, divorce might be a real possibility.

Despite his protests, Angela flies out to California for her surgery and acknowledges the risks of the procedure, especially after her doctor’s patient coordinator warns her of the dangers of smoking. (The incision might not close.)

Despite a “pretty f**king tough 90 days” and Mike canceling their wedding the day of (not to mention their engagement ending before during one of his trips to Ukraine), the two have been married six months now. But he’s not wearing a ring, something that bothers Natalie. “It makes me worried that Mike is not as serious about the relationship as he should be,” she admits. He protests he can’t wear one while working, but reluctantly agrees to get one to show his commitment to them. So, Natalie directs him to the shop and picks one out. After, he suggests they visit his mom for Thanksgiving to show he’s putting more energy into their relationship. Natalie’s nervous, and understandably, since Mike’s mother called his neighbor to try to get her to object during their wedding. (The neighbor refused.)

They’ve been married three years (with their second wedding in Moldova), and after being a stay-at-home dad, Andrei is ready to dive into work flipping houses after getting his real estate license. The only problem? He wants Elizabeth’s dad to give him a $100,000 loan to start his own business, and her family (especially her brother Charlie, who gave an awful speech at their most recent wedding) doesn’t like her husband. (He had lied about his past.)

Elizabeth knows Andrei’s request won’t go over well and suggests he just be appreciative of whatever her dad offers. She’s right: Chuck refuses to loan him the money but does offer to bring him into his business. (That’s something Andrei has turned down in the past.) Down the road, he might consider setting him up. As long as Chuck doesn’t hold anything against him, Andrei agrees. But there’s still the matter of Charlie in the family business. 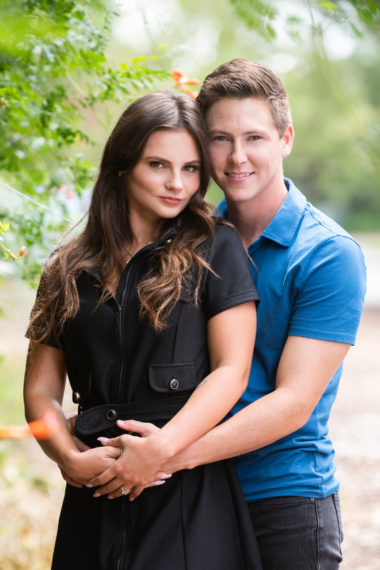 Julia is thrilled to be getting off Brandon’s farm and away from his parents with their trip to Las Vegas, to celebrate his new job. (She says they’re “never” coming back when his parents ask, and clearly, she hopes that’s true.)

Ron thinks his son Brandon has been more submissive to Julia’s whims since she came over from Russia, so he’d probably be happy to see how the conversation about moving to Las Vegas permanently goes down. Julia loves the big city and suggests they stay there, while Brandon, after joking that they’re going to look at a house nearby the next day, insists they can’t. “This isn’t real life,” he says. They can’t afford to move to Vegas, even if he has told her in the past they’d move out so they’re no longer living with his parents. He wants her to be patient, while she’s willing to move on her own.

Kalani is hoping that moving into a new-build home will give her and Asuelu the “fresh start” they need, but she also knows that it’s crazy to buy a house to save a marriage. At the very least, it’ll give her family a break from the couple’s fighting. Neither wants to give up, especially since they have kids. But even if having their own space makes him happy, it could just be part of their constant cycle of ups and downs. And there’s another source of conflict on its way: Kalani’s sister, Kolini, who will never see eye-to-eye with Asuelu, is coming to visit for a month. And she’s already planning the divorce party. Ouch.

Be Careful What You Wish For