Of course, Sherlock has been solving crimes on television for six decades now, meaning the character has been a small-screen fixture almost as long as TV has been a medium.

Below, we recap some of the most notable Sherlock Holmes adaptations, from his black-and-white beginnings to his shadowy new incarnation on the streamer. 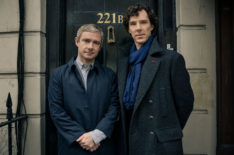 'Sherlock' Debuted 10 Years Ago — Will There Be Another Season?

According to The Sherlock Holmes Society of London, the first TV show to bring the character to life was the 1951 BBC series Sherlock Holmes, starring Alan Wheatley as Holmes and Raymond Francis as Watson.

Three years later, the detective hit American television with the syndicated Sherlock Holmes, with Ronald Howard in the lead role and Howard Marion-Crawford playing Dr. Watson. As Billboard noted in a 1955 issue, the show was filmed across the pond in Paris and London.

ITV adapted dozens of Conan Doyle’s Sherlock Holmes stories across four series, with Jeremy Brett of My Fair Lady fame playing the master of deduction for a decade. (Check out the clip above to see a teenaged Jude Law on the show.)

On Canadian television, Meredith Henderson played a distant descendant of Sherlock Holmes in YTV’s family mystery The Adventures of Shirley Holmes. She even picked up a Gemini Award for her performance.

This British-American animated series, which aired on Fox Kids and in syndication stateside, sent Sherlock (Jason Gray-Stanford) into the 2100s, where he got acclimated to the future with help from an android named Watson (John Payne).

The CBS drama not only brought the detective into modern-day New York City, it gave this version of Sherlock Holmes (Jonny Lee Miller) a female partner, Dr. Joan Watson (Lucy Liu), who found that keeping the sleuth in line was not so elementary.

Sherlock (Henry Lloyd-Hughes) maintains an elusive presence in this new Netflix drama, which is unrelated to the streamer’s 2020 film Enola Holmes starring Millie Bobby Brown as the teen sister of the sleuth (Henry Cavill). Here, Sherlock’s the shadowy business partner of a sinister Watson (Royce Pierreson), who manipulates the titular group of teenaged street urchins into investigating London’s supernatural underbelly.