‘Chicago Fire’ Says Goodbye to a Member of Firehouse 51

Firehouse 51 has lost another paramedic to another career move on Chicago Fire.

In the March 17 episode of Chicago Fire, the newest member of the firehouse, Gianna Mackey (Adriyan Rae) gets much more than a certificate when she completed necessary training. She also receives a job offer: Firehouse 33 has an ambulance with an open spot, and the paramedic-in-charge (PIC) plans to retire in a year. The position would be hers if she transferred. And in the end, she does.

After all, as Mackey tells her friend and firefighter Joe Cruz (Joe Minoso), it’s “a great opportunity,” especially with Sylvie Brett (Kara Killmer) firmly 51’s PIC “for years to come.” But there’s more to it than that, she admits, because she’s had a hard time concentrating when he’s been in danger. “You’re my connection to Dex,” she explains. “If I lose you, I lose that.”

Brett’s supportive of the move, telling her (now) former mentee, “You will definitely be missed here, but trust me, you’ll doubt yourself forever if you don’t jump on an opportunity like this.” 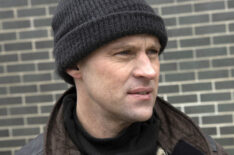 And with that, Rae has left Chicago Fire as a series regular. “Adriyan let us know she had some private reasons to leave Chicago,” showrunner Derek Haas told EW. “To hear that as a showrunner, you absolutely respect what an actor needs. All I can say is we love her and I know she’s going to be great on some other series. And she left 51 on great terms, so there’s a chance we could check in on her.”

After all, we’ve seen firehouses work together during calls in the past and Mackey hasn’t left Chicago.

That means Ambulance 61 is getting a new paramedic. Might it be someone we already met, firefighter Blake Gallo’s (Alberto Rosende) ex Violet (Hanako Greensmith), who shows up for a meeting with Chief Boden (Eamonn Walker) just after he signs off on Mackey’s transfer? Probably, at least for the immediate future. Brett will probably be happy with anyone but the floater from “Double Red,” Diggins (Nick LaMedica), especially since he left her with a cat!