While TWD’s unexpected bonus episodes aren’t really advancing the main plot, they’ve allowed for character exploration — and that’s exactly what we get in “One More.”

'The Walking Dead': Daryl's in Love — And It's Not With Who You Think (RECAP)

By throwing together the perhaps unexpected (but delightful!) character combo of Aaron (Ross Marquand) and Gabriel (Seth Gilliam), TWD takes some time to muse about the nature of humanity in desperate situations. When they’re forced to play a dark “game” by a deadly captor, their situation might just prove that Gabe’s negative opinion of people in the post-apocalyptic world is right.

The Rule, Not the Exception

The first part of the episode centers on Aaron and Gabriel’s search for food, which they’re conducting based off of a map Maggie (Lauren Cohan) had given them. They’re only successful in finding empty cans and bodies of people who died in disturbing ways. (Aaron is rattled by corpses of a family, dead in each other’s arms.) They’re almost ready to call off the search when they stumble across a warehouse that wasn’t on Maggie’s map, and they go inside to check it out. At first, this doesn’t appear to have been a gigantic, deadly mistake, because the place appears to be empty. Aaron finds and kills a boar that was locked inside a room (he has no choice after it attacks him), and they stumble upon a bottle of rare, expensive whiskey, so they have a fancy dinner — well, at least by apocalypse standards. The more they drink and play cards, the more Gabe talks. He reveals to Aaron that despite his conviction in his faith and his desire to get back to preaching the gospel, he now believes evil people are “the rule, not the exception.” Oh, and Aaron discovers that night that Gabe snores something awful, which leads him to go outside to relieve himself. In the middle of the night.

If you’re thinking that was a bad move, it was. The next morning, Gabe discovers his friend isn’t in his makeshift bed. In searching the warehouse for him, he stumbles upon another survivor (played by guest star Robert Patrick). He asks what they had to eat — Gabe tells him about the boar — and he asks if he could have some. From there, things escalate quickly. Turns out, the guy lives in the warehouse and he’s none too pleased Aaron and Gabriel broke into his house and killed his pet. He fires a few shots of his shotgun to make his point clear, then he hauls a tied-up Aaron out of a back room and places him across a table from Gabe. 'The Walking Dead' Preview: A New Survivor Pops Up With a Hair-Raising Entrance (VIDEO)

Keeping his shotgun trained on them, the guy takes out a pistol and places one round in it, then puts it on the table between them. He explains the rules of his game: Aaron and Gabriel must take turns picking up the pistol and firing it. They can choose to either aim the pistol at themselves or at their friend. And if they refuse to fire it, the guy will kill them both.

Aaron and Gabriel are forced to pick up the pistol and press it to their temples. The first round of the “game” sees them both safe, but on Aaron’s second go, the weapon makes a different sound; “a round clicking into the chamber,” their captor sneers. He taunts Aaron by asking him if he really wants to aim at himself, but Aaron’s too good, too kindhearted to take someone else’s life so his can continue. He presses the gun to his head, his finger winds around the trigger, and… 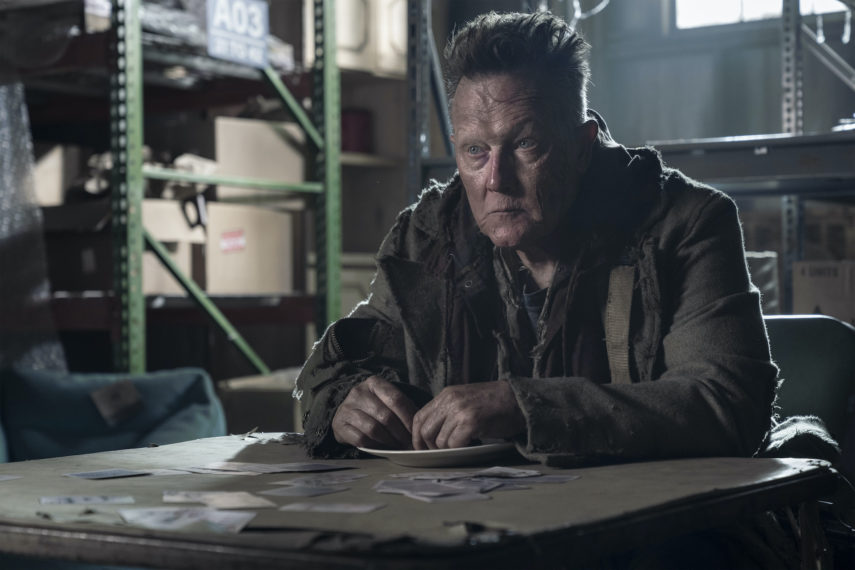 “Stop!” the man yells, swatting the weapon away from Aaron. He continues bellowing, telling them that “this is who people are now” and that they shouldn’t forget how foul humanity has become. Turns out, his faith in people was annihilated when his brother, who he’d been living with after the world ended, turned on him and started stealing his food. He had to “take care of it” (meaning, presumably, he killed his brother and earned the scars on the side of his face in the process).

After hearing his story, Aaron and Gabe offer him a place in the community. They seem to believe he can be rehabilitated if he sees there are still good people in the world. The man accepts, and Gabe gets up to gather his things. While he’s gone, the man introduces himself to Aaron. “My name is Mays,” he says.

Suddenly Aaron’s covered in blood. Gabe had gone to retrieve Aaron’s metal arm with a morning star attached to the end, and he bludgeons Mays to death with it. “We couldn’t bring him back,” Gabe tells a shocked Aaron, who doesn’t seem convinced. Well, it turns out Gabe was very, very right. They explore the warehouse a little more and find Mays’ living space. He didn’t kill his brother: he chained him up next to the corpses of his wife and child. Understandably, his brother’s utterly traumatized. Aaron and Gabe free him, but he kills himself and dies embracing his family’s remains.

Having witnessed such horror, Aaron and Gabe leave the warehouse and discuss whether they’re going to continue looking for food. They come to the conclusion that they’ll search the last place on the map: “One more.”