‘The Flash’: Does Barry Go Too Far to Try to Save Iris From the Mirrorverse? (RECAP)

[Warning: The below contains MAJOR spoilers for Season 7, Episode 2 of The Flash, “The Speed of Thought.”]

If Barry Allen (Grant Gustin) doesn’t have to worry about his enemies using his heart against him, what does that mean for The Flash? Well, thanks to his newest superpower — there had to be a downside to the artificial speed force that puts him back into action — he might as well not have one. Instead, we get a Barry who might as well be a robot when he develops the ability to speed up thinking. On one hand, it allows him to solve the problems he and the rest of the team on Earth Prime — Cisco (Carlos Valdes) and Allegra (Kayla Compton) — face when it comes to figuring out how to get their missing friends — Barry’s wife Iris (Candice Patton), Cisco’s girlfriend Kamilla (Victoria Park), and police chief Singh (Patrick Sabongui) — out of the Mirrorverse. On the other hand, Barry realizes that they can’t bring everyone through the portal and decides to make the choice himself.

Thanks to Iris gaining control of some sort over the Mirrorverse (she has been there a while), when she sends a message to Kamilla and Singh to meet at the Speed Lab, Allegra receives it, too. Knowing that time and place, all that’s left is for Team Flash to figure out how to pull them through the portal. In words those who don’t have super-speed thinking can understand, they need the photons on the villainous Eva (Efrat Dor) — she did escape from the Mirrorverse – and retrieving them is a success. But Barry does let Frost (Danielle Panabaker), back from recovering from an injury to lend a hand with her cold powers, take a laser blast from Eva when he had time to save her.

There was a 0.002 percent chance the tachyon enhancer, holding the photons, would have been hit, if he had, he explains. And he knew he could help her. That’s just one of several hints that something’s wrong with Barry. “I need to aggregate,” which he says when talking about finding a solution to keep Eva from stopping them from opening the portal, is clearly another.

His plan to distract the villain: reveal to the world while she’s on a talk show that she’s not the real Eva (she’s a mirror duplicate) by playing the video he found on her computer of her death. Then they’re free to retrieve the “targets” — to him, that’s the same thing as calling them his friends — from the Mirrorverse. 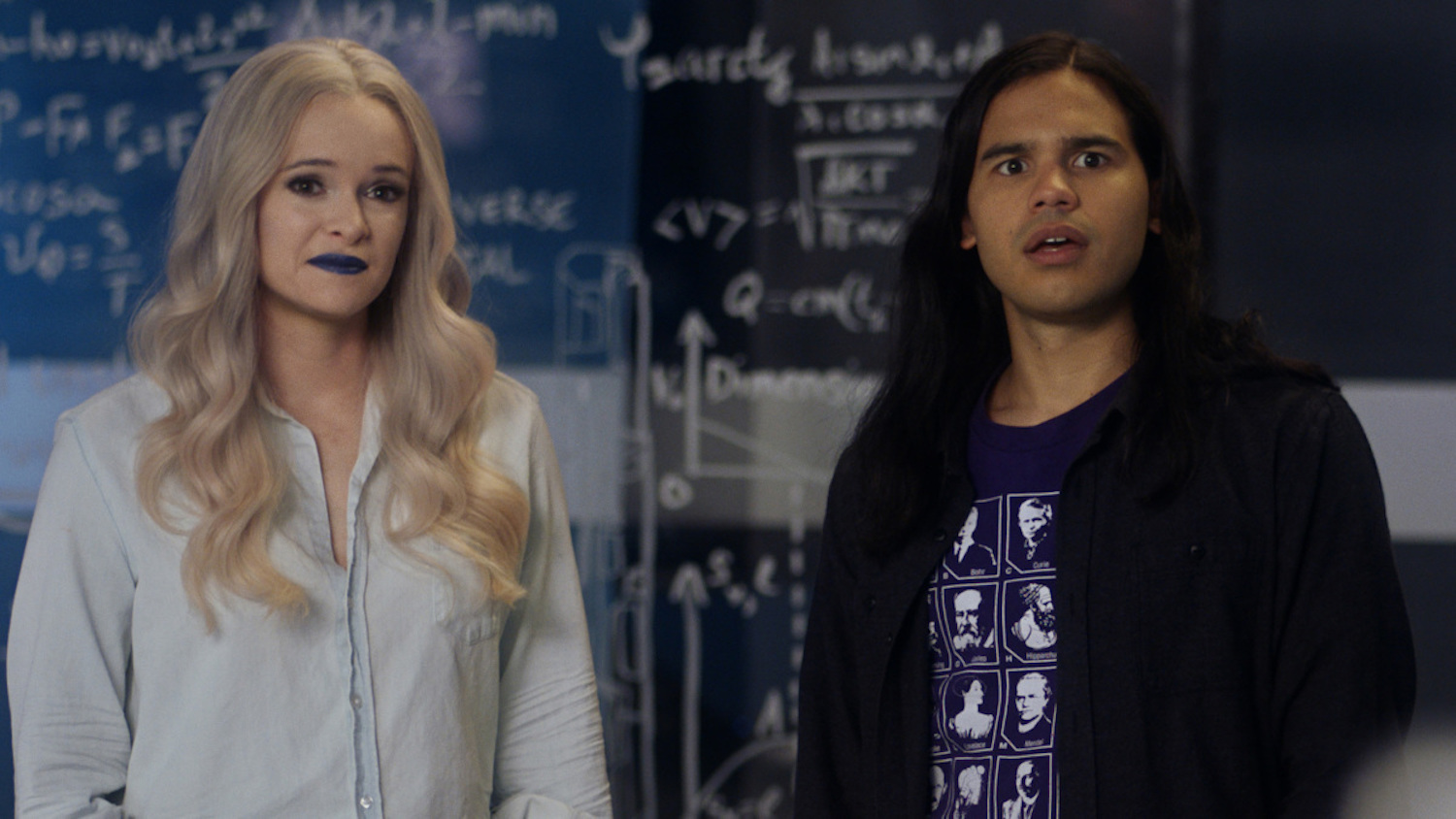 When the calculations tell him they only have enough photons to pull Iris or Kamilla and Singh through the portal, due to the amount of time they have each been in the Mirrorverse and a simulation shows only him choosing Iris, Barry makes the decision himself. But, as he explains to Cisco when his friend figures it out, it’s not because she’s his wife. Rather, Iris has knowledge about Eva that he needs to gain a tactical advantage. He’s lost his heart as a result of the artificial speed force.

Cisco, Frost, and Allegra try to stop him — Frost even injects herself with Velocity-X, temporarily giving her superspeed and resulting in quite the cool fight across the city — but in the end, Barry wins, and everyone’s unconscious as he opens the portal.

On the other side, however, Iris is trying to help Kamilla and Singh, who have both collapsed as a result of a side effect of being sent to the Mirrorverse by a mirror gun rather than being pulled through the mirror in Eva’s office. She refuses to leave them, so Barry forces her to come through the portal … and she promptly collapses. That’s when Barry comes back to himself, realizing what’s he done to his friends, and he destroys the artificial speed force. Lightning shoots out from and around him. Does he have his speed? Will everyone be OK? We have so many questions… and so many more after the final scene.

In the premiere, Nash Wells (Tom Cavanagh), who had all the versions of Harrison Wells in his head after the collapse of the multiverse in “Crisis on Infinite Earths,” sacrificed himself to get the artificial speed force up and running. And now, in the final scene of Episode 2, we go back to when Eobard Thawne (Matt Letscher) killed the real Harrison Wells and took his form. Harrison was buried. But, now, glowing green particles appear above his makeshift grave and form … the original Earth-1 Harrison Wells? A new Harrison Wells who looks like the original? We’ll have to wait to find out.