Michael Strahan is opening up about his exit from Live! with Kelly and Michael for the first time since everything went down in 2016.

For those who may forget, four years ago, Strahan abruptly left the morning talk show for a gig at Good Morning America, apparently blindsiding co-host Kelly Ripa. Now, the former NFL star is breaking his silence on the departure in a new New York Times interview.

“It was an experience!” he says of his time on the show from 2012 through 2016, before later adding, “One thing I will not do is alter my attitude for somebody else’s. I learned so much from Kelly, so much from Michael Gelman. When it was time to go, it was time to go. Certain things that were going on behind the scenes just caught up.”

Strahan also maintains that he never threatened to leave but was asked to take the job at fellow ABC morning show GMA, which led to his eventual Live! departure. “I was asked to do it by the people who run the network. It was really not a choice. It was a request,” he explains. From there, the host says the situation “was treated as if I was the guy who walked in and said, ‘I’m leaving.’ That part was totally misconstrued, mishandled in every way. People who should have handled it better have all apologized, but a lot of the damage had already been done.”

The Super Bowl champ also offers an example of the so-called behind-the-scenes drama, recalling, “One thing I tried to do is have a meeting every few weeks with her. We met a few times, and that was fine. But then eventually she said she didn’t need to meet. Can’t force somebody to do something they don’t want to do.” 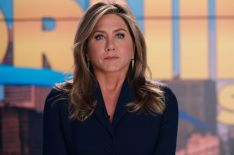 But just because things didn’t end on a high note for the former co-workers doesn’t mean Strahan has anything but goodwill towards Ripa. “She’s brilliant,” he gushes of the daytime mainstay. “If people think, ‘Oh, he hates her’ — I don’t hate her. I do respect her for what she can do at her job. I cannot say enough about how good she is at her job.”