Dakota Kai spent much of 2019 recovering from a torn ACL and counting the days for a return to the WWE ring. She channeled all this energy into returning with a renewed career perspective. No longer would the likable Kiwi wait her turn.

When the opportunity presented itself at NXT TakeOver: War Games, she grabbed hold tightly. Kai’s months of frustration came out during an attack on best friend Tegan Nox. A culmination of a planned villainous and hard-nosed character change.

“It was always a thing that we were going to do. In terms of how it was executed, that wasn’t until we were really told about the War Games match,” she remembers. “I think there were thoughts if this could be a thing I could pull off, but there was a lot of fuel to the fire there personally and with the story as well. Being away from the wrestling ring for nine months really does give you a lot to think about.”

Now that “Team Kick” is imploded, Kai remains focused on working her way up the NXT women’s division. With Mia Yim on deck, the 31-year-old sits down to put the whirlwind few weeks into perspective. You were on the shelf for quite some time just as the NXT women’s division was heating up again. How did you keep your spirits high on the road to recovery?

Dakota Kai: I’ve never had a serious injury like that where I had to be sidelined for months at a time. Basically, your focus just shifts. Instead of focusing on matches and training, you’re focusing a lot on rehab. We just had to redirect attention to that. I put all my energy into rehab and keeping the goals very much alive. There would be a lot of hard days, but I would always think to when I would be cleared, I wanted to hit the ground running. I wanted to show people what they hadn’t seen from me before. I think that was the motivation going into coming back, so when I came back to the ring I didn’t miss a beat.

Did it make things easier to have someone like Tegan Nox, who was going through a similar journey around the same time?

She had already been through it once before, so having someone to motivate you and know what to expect going forward. There are a lot of things with an ACL injury, a lot of the rehab is painful. You kind of have to push through it. She would always give me the ins and outs of what to expect. It did make things a lot easier.

The beloved WWE host feels she found her sweet spot working on the FS1 studio show.

When you return from an injury like that, it has to weigh on you mentally to some degree. How has it been transitioning back into the ring?

That’s always going to be a thing in the back of anyone’s mind — not just an ACL injury, but any big injury. I was super nervous. My first match back was actually live on the USA Network. That was hell. Rehab doesn’t really stop with an injury like that either. You can’t let it get to you. You just have to keep going.

Now you just exude this confidence when you come out. You have mastered the smoky eyes — I know Renee Young commented on the new look. You’re getting a lot of positive feedback, which is interesting because here is someone who beats up their best friend on TV, and fans are cheering and saying good job. Only in pro wrestling!

It is weird, but at the same time, I am myself. I feel justified all this is happening. This isn’t just something where I just lost my temper and did this. I think a lot of people can actually see I’m justified. Rhea [Ripley] said I needed to prove myself to be on the team. Having a match against Shayna Baszler, who nobody else has beaten (except for Kair Sane), what does that mean? It means Mia Yim comes out and gets picked for the team? That’s not fair. I think a lot of people saw that was unfair as well. I think people can see this is a justified thing that I’ve done. It’s not a random change in character. It was dumb. I essentially should have been on their team. I think that plays a lot into it, too. 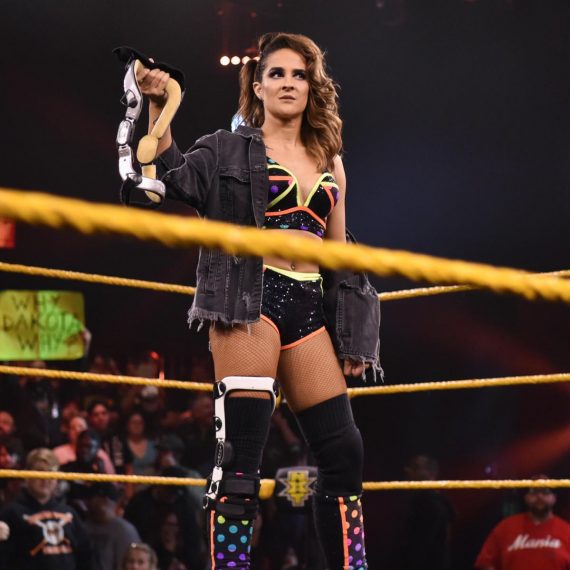 The timing of it, this turn was not that long after Bayley underwent a similar transformation. Did you take anything from her approach? Where did you find inspiration?

I do my own thing. I know I get a lot of comparisons to Bayley, but we both very much do our own thing. In my mind, I had fuel to the fire to why I would eventually turn on my best friend. I used a lot of the storyline and kind of let it go. I kind of winged it.

Triple H was very complimentary to you in recent weeks when it comes to your recent work on TV. Who has helped you get to this next level you’d say?

Our main coach here and usually the one who produces a lot of our matches is Sara Amato. I used to watch her when she was Sara Del Rey. She is the main one who we have a lot of communication with. Both Shawn [Michaels] and Triple H have been having a heavier role in this whole thing. Those are the main three. Then you have Road Dogg, too, who is awesome. We’re getting a lot of feedback from a lot of great people.

What has the experience been for you to come from New Zealand and over the years acclimate to the U.S.? What challenges have you overcome? I don’t think people think enough about what international talents must endure.

The States, to me, have always been seen as this amazing entity. I know that before I traveled here I did come here a few times for some independent shows. The transition wasn’t as hard because I came here a few times. At the same time, it was overwhelming because I had to move my whole life from the other side of the world to live here. That was overwhelming. Packing up one suitcase is going to be weird and having no intention of coming back home anytime soon is weird, as well. My heart will always be close to New Zealand and home. The first 13 months living here has been hard. Homesickness, I think a lot of international talent deals with this. It has gotten easier. I think the transition was pretty flawless, but I have my moments of missing home for sure.

I’m sure the holidays can make it extra tough and your family watching you from abroad. What do they think of the attitude change onscreen?

My brother and sister are up to date how wrestling works, especially my brother. He introduced me to it. I watched with him at home all those years ago, so it’s weird for him to see that. My parents are a little more maybe shocked, [but] they still enjoy it. They are going to support me no matter what. I went back at the end of last year [and] it is quite difficult for me to go home because it’s such a long flight. It’s hard for me to spend a few days at home when the flight is almost 30 hours. I hope to go home next year at some point.

You are part of such a strong locker room in the NXT women’s division. What was the feeling you got coming back to everything happening with USA Network? You’re now on a similar playing field as Raw and SmackDown.

All of the talent definitely feels part of the main roster now. There is no moving up in our mind, which was always the goal before. All of us want to elevate NXT to this whole new level. The women’s division, we take a lot of pride in it and what we represent. It’s been getting a lot of positive feedback. You have all this amazing talent not only weekly that you see on TV, but there is a lot of newer talent that has yet to be showcased who are also amazing. There is a lot of positivity here. We want to keep elevating it and keep the focus on wrestling. I’m very proud of this division, I think a lot of us are. This week you’re working against Mia Yim. What can fans expect?

Fans can expect a fight. She wants revenge against me, and I’ve got a lot more to prove. I think Mia seems to think that was a one-off thing that happened at War Games, but I’ve got a lot of untapped aggression that she is going to see on the USA Network. All I can say to Mia is watch your back.

You’re obviously going to be building toward a match between you and Tegan Nox. Have you guys as good friends mentally prepared for when that day comes?

We are both prepared for that. Tegan has been out at the moment. We both know what is to come and will give it our all. A lot of people have been doing comparisons to Johnny [Gargano] and Tommaso [Ciampa.] We want to put our own spin on it and make it as unique as possible. I think that’s going to be exciting. Giving the fans something that they haven’t seen before. There are a lot of emotions behind it too they are going to see.