Perhaps Darrell Waltrip’s retirement as Fox Sports’ premier NASCAR analyst would make more sense if he didn’t sound like an overjoyed kid every time he utters the phrase that — for generations of motor sports fans — has come to mean the exciting start of a speedy Sunday drive.

The 72-year-old three-time Cup Series champion knows not everybody loves to hear, “Boogity! Boogity! Boogity! Let’s go racing, boys and girls!” Some claim it “dumbs down” the sport, he says. But letters from moms who write, “That’s what I tell my kids when it’s time for lunch, or when the race is about to start” mean the world to him.

NBC to air Indy 500 for the first time

Waltrip began his own racing career in go-karts when he was 12, growing into one of NASCAR’s all-time greats. He won titles in 1981, 1982, and 1985 and, in 2012, entry into the Hall of Fame. Seeing his results go from reigning to waning (“I fought the wall and the wall won,” he quips), he hung up the helmet in 2000, at age 53, and changed lanes just as Fox was set to begin its high-profile broadcasting run of the sport.

A year later, his debut Daytona 500 in the booth brought an overwhelming mix of emotions, combining his brother Michael’s first-ever big-time victory with the last-lap death of his rival turned close friend Dale Earnhardt. As decades passed, Waltrip pressed for necessary safety moves, since adopted: “Most drivers feel pretty confident they won’t get killed in the car, and it’s incredible we can say that.” 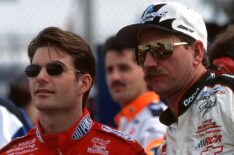 'Unrivaled: Earnhardt vs. Gordon' Revisits One of NASCAR's Fiercest Feuds

Now, with fellow former champ Jeff Gordon comfortable in the TV booth, DW, always a master of timing, will step off the gas following Sunday’s race in Sonoma while still at the top of his game. “It seemed like the right time,” he says. “Life speeds by.”