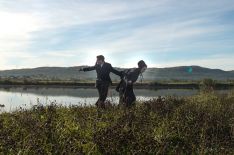 What is Agent Novak up to when the show opens?

Chris Noth: Frank found the Bureau much too slow for the most difficult abduction cases, which is why he formed the task force — it’s based on an actual FBI unit. Because of the nature of abduction, you have a finite amount of time, usually less than 72 hours, to find the person alive. The conceit is that Frank’s the one who found Kick when she was a child. We bring her on because she’s lived in the wolf’s den and knows how a wolf functions.

Is Gone primarily a case-of-the-week procedural? Rambin and Noth in Gone

Law & Order was more about the crimes. Will Gone delve more into the characters’ pasts?

Yes. The group we have, which also features tech wizard James Finley [Andy Mientus] and FBI agent Maya Kennedy [Tracie Thoms], are all in some way damaged, including the divorced Frank. None are unaffected by the physical and psychological [trauma] that abduction brings to the victims.

For six years, you were playboy Mr. Big on Sex and the City, which had its finale 15 years ago. Thoughts?

It’s probably the most fun I’ve ever had on a TV show. And I still have all of Mr. Big’s suits! [Laughs] It was a period where I loved what New York City was, before it became Disneyland.