Watch My Show: The Comedians’ Ben Wexler on Why Bears (and People) Should Tune In

On FX’s new comedy The Comedians, Billy Crystal and Josh Gad play Billy Crystal and Josh Gad, the mismatched stars of FX’s new comedy. Got that? The faux docuseries about a faux sketch comedy comes from the minds of Larry Charles (Curb Your Enthusiasm), who has also played a version of himself on the show, along with Matt Nix (Burn Notice) and Ben Wexler (Community, Arrested Development). On Thursday night’s episode, Josh takes Billy out for his birthday–and it’s probably safe to assume it doesn’t go well. Wexler (right) took a moment to fill out our showrunner survey and explain why we should stand up for The Comedians.

Anything I say right now will be construed as a threat. Pass.

“That’s a wrap on Season 1” – Our assistant director.

The Unexpected Virtue of Ignorance.

The Book of When Larry Sanders Met Sally.

The Tragedians (the whole thing turns out to have been a horrible, Oedipal fantasy).

Hm? What was that?

We have five series regulars and four of them are amazing. That’s a really high percentage!

Soap. It kinda writes itself, doesn’t it?

The face of TV is looking great these days. We just hope to make it smile a little wider. 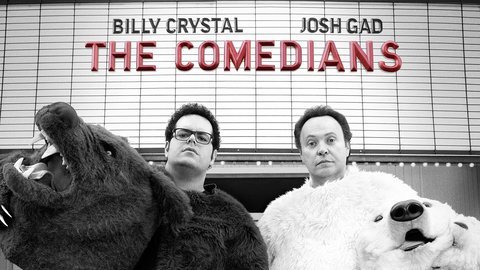 The Comedians where to stream