FX’s Justified airs its final episode on April 14 (10/9c). The Tale of Raylan Givens will end, and Raylan (Timothy Olyphant), Boyd Crowder (Walton Goggins), and Ava Crowder (Joelle Carter) will either ride off into the sunset or turn that Kentucky bluegrass red. “We made some big choices. We’re proud of it,” is all Justified executive producer Graham Yost would say about the finale, but to help us pay tribute to the show, Yost picked the one episode he’s proudest of from each of the five previous seasons. We’ve provided our own picks for variety’s sake. “That’s where it all started. It’s very close to Elmore Leonard’s novella [Fire in the Hole], though we made some necessary adjustments that gave us the show—the big one being Boyd being alive. One of the reasons the show got on FX was the adjustment we made in adding that last scene between Raylan and Winona. She says, ‘Honestly, Raylan? You’re the angriest man I have ever known.’ That gave us somewhere to go for series.” Our Pick: Episode 5, “The Lord of War and Thunder”

The Justified pilot is one of those rare first episodes that knows exactly what the show wants to be, and sets up the series to deliver on the premiere’s promises. It’s in Episode 5, however, that we meet Raylan’s Aunt Helen (also his stepmom) and father Arlo, and really start to explore Harlan County through Raylan’s reluctant eyes. Seeing his twisted roots added depth and began the process of world-building that led to a dynamite second season. 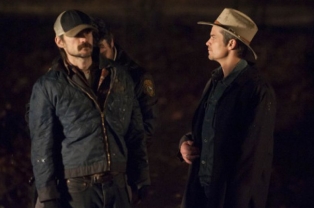 “There’s a lot to be said for this season’s finale, ‘Bloody Harlan,’ but ‘Reckoning’ ends up on the pedestal. Raylan had a strong drive throughout the episode: Finding out who killed his Aunt Helen—Dickie Bennett—and then tracking him down. We finally saw that angry man. He had every right to execute Dickie, but he didn’t, because it would dishonor the memory of everything Aunt Helen tried to achieve for him. That final scene in the woods with Dickie… I remember walking around the house talking with Tim [Olyphant] for an hour, about how the scene would go, and where it eventually landed was perfect. It’s what Raylan doesn’t say—that he doesn’t say everything, that he stops himself, because he doesn’t want to lose it.” “There were a lot of wonderful scenes and moments throughout that year, but I think it really came down to the last 10 minutes of that episode, in the slaughterhouse. It has one of the most insane moments we’ve ever done, and that’s the arm chop. It was just improvised while they were shooting that night, that Limehouse would chop Quarles’ arm off, and Quarles would reach for the arm, and Raylan would just pull it away. [Laughs] That’s that Elmore thing of being horrifyingly violent and yet really fun and funny at the same time. The other reason that episode is an episode we’re very proud of is the switch that happens when Raylan finds out that it wasn’t Quarles who shot Trooper Tom, it was his dad. You only hear it, when he tells Winona at the end: ‘He saw a cop in a hat and thought he was going to hurt Boyd, so he shot him.’ Just the way Tim delivered that speech, kind of offhand, but hiding so much pain.” 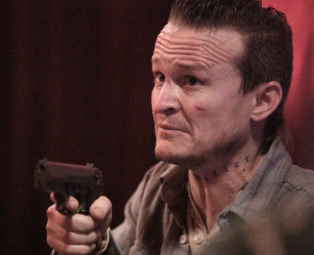 The Justified writers were always careful not to overuse our favorite dimwitted gator poacher Dewey Crowe (Damon Herriman), who almost seemed too dumb to believe any of the neo-Nazi crap tattooed on his person. They finally gave us the Dewey-centric “Thick as Mud,” the origin of the Dewey “Four Kidneys” Crowe joke. Dewey is forcibly broken out of prison, then wakes up in a hotel bathtub with two incisions where he thinks his kidneys are and assumes the worst, then goes on an ill-advised crime spree to get enough money to ransom back his kidneys, which weren’t actually missing in the first place. Bless your heart, Dewey Crowe. “That was something that just came together for me and [Chris] Provenzano, in terms of writing it. [Director Michael] Watkins did the big convoy shutdown up in the high country. We had one of the most brutal scenes we’ve ever done, just language-wise, with a scene between Ava and Nicky Augustine (Mike O’Malley). The other great scene in the episode, and Watkins just nailed it, was Constable Bob (Patton Oswalt) getting the s—t beat out of him to ‘Love Train.’ We thought about shooting an insert of Yolo, the bad guy, turning on the radio, but then we said, ‘Nah.’ There are times we ask, ‘What would Tarantino do?’ He’s such an Elmore lover and understands that world, but also has his own spin, and that gave us the confidence to just do it.” “So much happens in this episode: Boyd is just on a tear, killing, and then at the end of the episode, just when he thinks he’s got Ava free, she gets hauled off to state prison. It’s a big loss for Boyd, and you can feel his anguish. But it also had one of our favorite scenes in the series, which is Art Mullen (Nick Searcy) showing down with Alan Tudyk’s gangster at the diner. I remember when Tim read the script, he said, ‘Man, why couldn’t this have been Raylan’s scene?!’ And then, at the end of the episode, even though Raylan knows he’s off the hook for arranging for the murder of Nicky Augustine at the end of Season 4, he’s got to unburden himself to Art, but in a roundabout way that won’t get Art or the office in trouble. And you can just see the crushing, crushing disappointment which led to one of our best teasers ever, which was simply Art punching Raylan in the face.”

It’s the final scene of this episode that justifies (sorry) whatever meandering turns the rest of the season may have taken: Ava agrees to snitch on Boyd for Raylan, and the two meet at night on a bridge to talk. In a beautiful callback to the pilot, where Ava greeted Raylan with “The minute you walked in I knew everything was going to be all right,” Raylan replies to Ava’s admission of gut-churning fear with, “Don’t be. Everything’s going to be fine.” Ruby Friedman Orchestra’s boot-stomping version of “You’ll Never Leave Harlan Alive” plays as the two walk away from each other, fates already sealed.