On October 22, David Letterman will receive the prestigious Mark Twain Prize for American Humor from the John F. Kennedy Center for the Performing Arts (it will be broadcast on a later date). In the meantime, fans can savor his career—from a humble start as an Indianapolis weatherman to his legacy on both NBC’s Late Night and CBS’s Late Show—in the new biography Letterman: The Last Giant of Late Night, by Jason Zinoman.

Letterman is characterized best by the eye-rolling and snide remarks he used to distance himself from the showbiz world. He even distanced himself from the title of his own show: “Late Night is like calling Coke ‘brown fizzy soda,’ Letterman said, according to Zinoman. “It’s nothing but serviceable.” 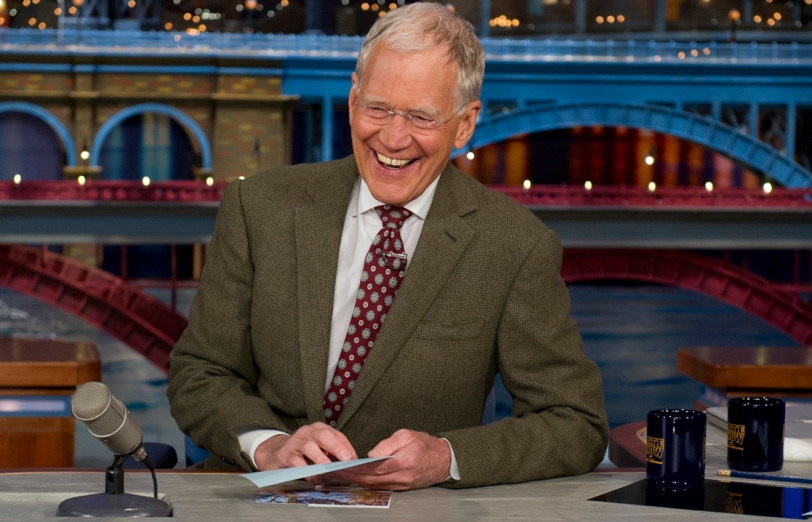 The outgoing late-night host has always had a taste for a good gag. Here, some of his best sneak-attack jokes.

However, distance only makes the heart grow fonder, which is why viewers stuck by him for 33 years, until his retirement in spring 2015. (He was replaced by Stephen Colbert.)

Zinoman describes the mischievous star as “a host who didn’t believe in hosting…whose sarcasm rendered everything he said suspect, a mocking challenge to anyone who pretended to take the ridiculous world seriously.”

1. In the first week of The David Letterman Show, Letterman’s longtime girlfriend, producer Merrill Markoe, created the iconic Stupid Pet Tricks, inspired by a night of putting socks on a Doberman pinscher in college. “The network suggested she use trained animals,” Zinoman writes, “but she refused, launching one of television’s most enduring bits.” Stupid Pet Tricks would entertain viewers 135 times over 34 years.

2. Another instant hit was Letterman’s Velcro suit stunt in 1984, when he stuck himself to a wall after jumping on a trampoline. It spawned future skits with Letterman wearing suits made of Alka-Seltzer tablets and Rice Krispies before leaping into containers of water and milk, respectively. “Part of the point was not just to make people laugh. It was to engage them,” according to writer Joe Toplyn. 3. Late Night writers Matt Wickline and Randy Cohen proposed Letterman film the first talk show underwater in 1988 (a $70,000 episode). The idea was discarded, but not until Letterman underwent a run-through in a New Jersey swimming pool. Wickline recalled, “I heard years later that he had a really sore neck from doing it and was in excruciating pain.”

4. NBC President Warren Littlefield gifted Letterman with a crystal decanter, which the host smashed on the air with a hammer in an act of anger toward the network. “It was a little shocking to me,” Littlefield said decades later.

5. Letterman lost The Tonight Show’s hosting gig to Jay Leno, but Johnny Carson went to The Late Show for his final TV appearance, on May 13, 1994. Zinoman writes: “Carson had made it clear which late-night host he preferred and provided a satisfying coda to the drama of the late-night war: David Letterman was the favorite son.”