In the Apple TV+ film Spirited, Ryan Reynolds joins Will Ferrell in a new musical take on Charles Dickens’ A Christmas Carol. But superhero fans might be more “spirited” about the never-made movie Reynolds mentioned in a new interview: a Christmas film starring his beloved Deadpool character.

Reynolds told The Big Issue about the lost project as he talked about singing and dancing in Spirited. “I would love to see a song and dance number in a Deadpool movie,” he said. “Four years ago, [Deadpool co-writers] Rhett Reese, Paul Wernick, and I wrote a Christmas movie starring Deadpool. But it got lost in the shuffle of Disney acquiring Fox, and it never got made. Maybe one day we’ll get to make that movie. It’s not a musical, but it’s a full Deadpool Christmas movie. So one day.” As it was, Deadpool devotees got a Christmas movie of sorts with 2018’s Once Upon a Deadpool, a PG-13 cut of Deadpool 2, the marketing of which capitalized on its Christmastime theatrical window.

Two months before that toned-down re-release, BBC entertainment journalist Lizo Mzimba tweeted that a Christmas Deadpool movie would be called The Deadpool Before Christmas, but it’s unclear whether the project in question was the PG-13 cut or the full Christmas movie Reynolds just discussed.

Reynolds, for one, is a big fan of the holiday, as he told The Big Issue. “Christmas, for me, is always about being with family,” said the actor, who has three children with Gossip Girl alum Blake Lively, his wife. 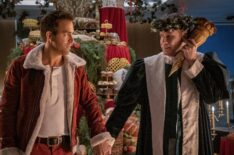 “I love the lead up to Christmas much more than Christmas itself, which can feel a little bit transactional sometimes,” he added. “We live in New York City, so we get to do all these amazing things. We see The Nutcracker at Lincoln Center, stuff that’s truly magical. If you told the seven-year-old Ryan Reynolds growing up in Vancouver that I would one day get to experience those things with my kids, I wouldn’t believe it.”

One upside of Disney buying 21st Century Fox is that Deadpool will finally join the Marvel Cinematic Universe in Deadpool 3, currently scheduled for November 8, 2024. The movie, which Reynolds is developing with Reese and Wernick, will kick off Phase Six of the MCU and will feature the return of Hugh Jackman, Reynolds’ friend and faux social media nemesis, as Wolverine.

Deadpool 2 where to stream