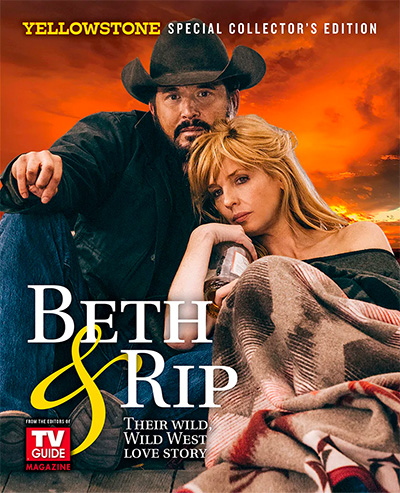 Circle the wagons! America’s favorite dysfunctional dynasty returns bigger and more powerful than ever in Yellowstone’s fifth season. The next phase of the Duttons’ all-out war to keep their massive ranch opens with a two-hour premiere—and a six-month time jump. Patriarch John (Kevin Costner) has won the race for Montana governor and is flexing like a king with a royal court: His audacious, loyal daughter Beth (Kelly Reilly) is his new chief of staff, and his less devoted, more tortured adopted son Jamie (Wes Bentley) is attorney general.

“John’s trying to blow it all up,” Bentley says of how government functions in Big Sky Country. He’s determined to use his authority to stop any development progress. “That becomes a clash of state versus corporate power — ironically, with John as the state. There’s definitely some shady business,” Bentley continues. “Jamie tries to convince [John and Beth] they could use, rather than break or bend, the law to do the things they want to do. But they’re a blunt object.”

If pride doesn’t topple the father-daughter political machine — “You could argue John is his own worst enemy at this point,” Bentley says — there’s plenty lingering from the January 2 season finale that might. Namely, Beth forced Jamie to shoot his biological dad (who’d put a hit on the Duttons) and took a picture of him dumping the body that she now uses as blackmail to control him. Bentley knows fans are torn over the incident: “For a minute, they thought maybe Jamie was a good guy, and then he goes and does that. But I’ve also heard from people who feel sympathetic and are angry with Beth for getting him to do it.” No one’s fury can match Jamie’s, however. “He’s full of rage,” Bentley says. “[He and Beth] have intense interactions at another level this season.” Although he’s smart enough not to act when he’s just “a rat in a cage,” Jamie does have a lot of time to think about revenge. “He’s empty, alone, angry, resentful, guilty, and sad,” says Bentley, making us think Jamie no longer has his girlfriend Christina (Katherine Cunningham) and infant son waiting for him at home. “It’s only so long till he’s got to do something. What is redemption for him? It’s not gonna be pretty.”

Sis, meanwhile, is sitting pretty (for now) and goes home to newlywed bliss with ranch foreman Rip Wheeler (Cole Hauser), the only person as devoted to John as she is. “They’ve known each other for so long, there’s this kind of almost childish playfulness between the two of them that you just fall in love with,” Hauser says of the couple. But if past seasons are any indication, you never know when their bubble will be burst by another shooting, stabbing, kidnapping, or package bomb. We wouldn’t put any of those tactics past the Duttons’ most formidable enemy, Market Equities, which wants to develop the family’s land. CEO Caroline Warner (Jacki Weaver) escalates her campaign to destroy the clan, starting with Beth, who committed corporate espionage against her. On Caroline’s generous payroll is a new shark-in-a-sheath-dress, Sarah Atwood (Dawn Olivieri). “She comes in with force. Jamie particularly has to deal with her,” Bentley says. “She’s carrying the same strong business world energy [as Beth]. The women may have to duke it out at some point.” (And Jamie would get stuck in the middle. “As always,” Bentley says with a laugh.)

The family also clashes with powerful Broken Rock Tribe chairman and casino mogul Thomas Rainwater (Gil Birmingham), who still wants to reclaim the ranch for his people but has previously strategically allied with the Duttons against more threatening outside forces.

“This season throws a curveball for Thomas. John’s acquiring leverage and makes decisions with major repercussions for Rainwater,” Birmingham reveals. “He has a new opponent on the reservation trying to undermine his position. It’s a difficult choice — which path Rainwater follows [choosing allies]. He becomes more rattled.” The good news: He still has his right-hand man, Mo (played by Mo Brings Plenty, who’s now a series regular). Also struggling to choose a path, but in the spiritual sense, is Kayce Dutton (Luke Grimes). The former Navy SEAL and current state livestock commissioner is expecting his second child with his intellectual, justice-seeking tribe member wife, Monica (Kelsey Asbille). Kayce began that journey last season with a solo vision quest facilitated by Mo and Rainwater that resulted in one of the series’ most talked-about moments: Kayce reported to Monica that during his time alone and fasting in the wilderness, “I saw the end of us.”

“Oh man, we do find out what it means. You get a sense of it in the first two episodes,” promises Asbille. “By the end of the season, it becomes a strength.”

After years of trying to separate themselves from the Duttons, Kayce and Monica reconsider. “This season, they realize how much of a role they play in protecting the ranch,” Asbille says. “John’s way of life is constantly threatened. Monica, as a Native woman, identifies. She realizes that not only do they have that in common, but she is part of the Yellowstone legacy.” Despite this new bond, the couple’s marriage, which has had its rocky spells, is tested again. “Monica and Kayce go through something, and as tragic as it is, it pulls their hearts in different directions and changes who they are, in some ways for the better,” Asbille says. “They become stronger.”

Kayce returns to the reservation, for a time, so his son Tate (Brecken Merrill) can learn more about his heritage. Birmingham teases “a very powerful scene” but adds that the nature of the Indigenous culture “is always embedded in the ways we deal with challenges and difficulties of loss.”

Sadly, you can bet more than one life will end in this epic land war. Yet there’s a new light in the darkness. Country music artist Lainey Wilson joins the cast as Louisiana crooner Abby, who entertains in the local watering hole. Yellowstone boss Taylor Sheridan created the role specifically for the rising star, whose music has previously been used on the show’s soundtrack.

This is an abbreviated version of TV Guide Magazine’s Yellowstone cover story. For more on Season 5, pick up the issue, on newsstands Thursday, November 3.