Bravo finally gets the chance to take care of some unfinished business in the latest SEAL Team episode, and while doing so, Jason (David Boreanaz) hopes that by opening up to Omar (Raffi Barsoumian) he hasn’t ended his career as an operator. Even he knows he can’t do this forever.

But first, a quick recap of the mission: Bravo spins up, returning to Syria to take out the high-value target they didn’t last time. And in order to do so, they end up needing to get information from an ISIS leader — who then wants Bravo to make it look like he’s responsible. They agree and do just that, but then they find out they have another problem: Davis (Toni Trucks) tells them that the militia group that they’ve been after has been apparently working for Iran.

Meanwhile, Jason, Ray (Neil Brown Jr.), and Clay (Max Thieriot) are all at different stages of figuring out what life holds for them outside of operating. Ray and Naima’s (Parisa Fakhri) vet center is open, but he’s not exactly ready to say goodbye to Bravo just yet. After all, he seems to be thinking about his retirement plans in a new light after Jason tells him he read Omar in on his TBI. (Omar says he has his back. Let’s hope Jason can really trust him.) Ray expected to have to push Jason, but as Bravo 1 reminds him, he doesn’t have much longer to do that.

Green Team might not have been working out the best for Clay, but he’s doing better at home. He and Stella (Alona Tal) are working on things, and while he wants a pill, he’s holding strong. And when he stops by Ray and Naima’s vet center, it seems he might find his new way to serve. After intervening when a vet gets upset about filling out paperwork, he later sits down with the guy and gets him to open up while sharing his own story. No one can handle this on their own, Clay stresses. Clay’s even planning to go back the next day, he tells Stella. He liked feeling like he was making an impact while also having room for what’s important: her and their son.

As for Jason… at least he knows he needs to move? Granted, he says to an Airstream by the water, so he can drop everything in 30 seconds and run into the fire with Bravo. But Mandy (Jessica Paré) expects nothing less, and even admits she’d be worried if he’d said a house in Key West where he’d spend his days fishing. That’s just how both of them are. 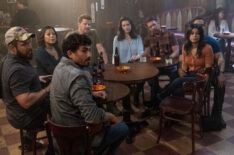 Still, Jason admits to Mandy, that while Ray and Clay have found their off-ramps from operating, seeing them move on has him thinking about the future, and adds: “I don’t see any off-ramps. All I see is Bravo. What does that say about me? Despite all the work that I’ve done on myself, I cannot quit this war.” She gets it, pointing out they both still have a lot of work left to do. But they know there’s collateral damage; the people they care about are the ones who pay the price. What they have going for them versus other relationships is that they’re both running in.

Plus, Ray reveals that command wants to interview him about Jason’s heroics in Mali. “F**k that, are you kidding me? No chest candy, especially not for that op” and what happened to Clay, Jason insists. He refuses to get a medal for the op that ended Clay’s career and wants Ray to make it go away. Ray can’t on this one — they’re talking about the Navy Cross.