Unfortunately, it was “Bye Bye Bye” after only one performance for Hummingbird (couldn’t resist) on The Masked Singer.

“Vegas Night” opened up with his unmasking, after he was eliminated in the premiere. And Hummingbird was none other than *NSYNC’s Chris Kirkpatrick! Panelists had been guessing him for seven seasons but hadn’t when it was actually him.

Here, Kirkpatrick opens up about his time on The Masked Singer, which of his *NSYNC bandmates he thinks would win the show, and more.

Chris Kirkpatrick: I’ve always loved the show, and the challenge of doing it I thought would be amazing, and it was everything I thought it would be. I was bummed to go, but at the same time, just the little experience that I got with the show, the people that run the show, the producers, everybody involved in it was so gracious and so awesome, it was like a breath of fresh air. It really was neat to go out of my element yet still be kind of in my element and have such an amazing, amazing experience.

Speaking of that costume, I was trying to figure out if you could see out of it at all based on where you were singing from…

Yeah, I kept getting worried about the lyrics for some reason, and I was like, oh, that’s fine, they have the lyrics that I can see, but I couldn’t see out of the costume. It kept getting fogged up, and I was too busy trying to look at locations on the stage where I had to be, and I felt like it was back to one of the first times I ever performed where it was almost like I kept feet-watching a little bit to make sure I didn’t trip over anything. That kind of took away from some of my performance, that I was trying to think about maneuvering rather than just performing.

What went into your song choice [“I Don’t Want to Be” by Gavin DeGraw]? Anything special about it?

No, I’m a big Gavin fan, I love Gavin DeGraw, and he’s a buddy of mine, really great guy. They gave me some options of songs, and that one stuck out. I decided I wanted to do that because I also know that I was known for high falsetto, and I said if I do a song like that, they’re going to get it right away. So I tried to do something a little bit different to throw them a little bit.

Joey was the Rabbit. Did you talk to him at all about doing this or get any advice from him?

No, I tried to keep it real tight-lipped and just kind of went out, and afterwards, he figured it out really quick, as did a lot of fans. But for the most part, I didn’t want to spill the beans, so I just kind of went with what the people on production were telling me, giving me little hints here and there in what to do.

Have you heard from anyone else from *NSYNC in the past week guessing it was you?

Lance did. Lance is doing something for the show, so he definitely guessed it. Him and Joey both texted me and were like, I like hummingbirds. But when you sing with guys for almost 30 years, they know your voice, so there was no hiding from them. 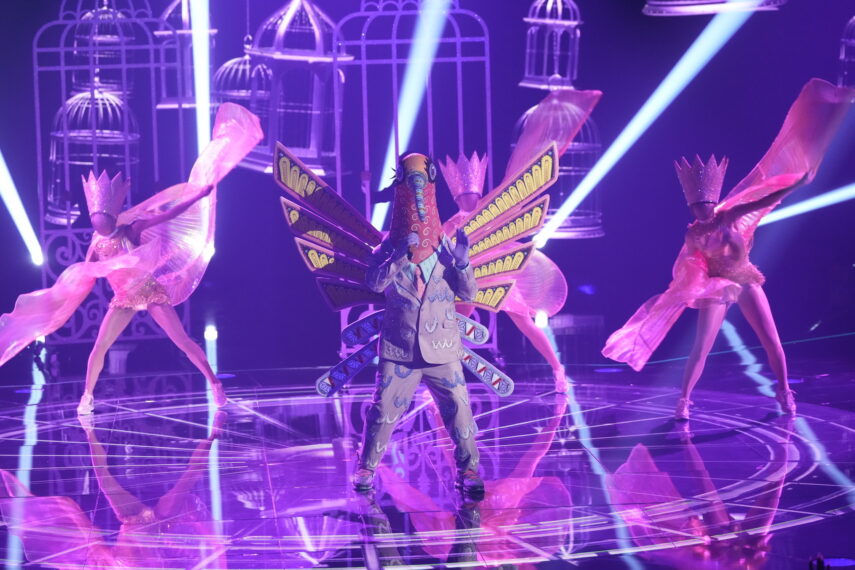 You mentioned Lance doing something this season, and obviously, he would have known it was you, but how disappointed are you that your paths didn’t cross on the show?

I was going to say — Robin [Thicke] said they’d been guessing you for seven seasons, and then when it is you, they don’t. So you came in expecting them to figure it out?

They guessed a football player. But I think it’s because I did fool them, so that’s a good compliment.

Did you have any songs in mind if you’d continued on? And something with not as much movement because of the costume?

Yeah, man, that was hard. We actually had to change the costume a couple times so I could even walk in it. It wasn’t feasible to walk at first. But the people that do the wardrobe and the costumes are just absolutely amazing, and they made it work. It’s just me getting used to dancing with these giant heavy wings and this enormous head and this long beak that was a little difficult.

What did they change about the costume?

They just modified it a little bit so I could move around, and I wasn’t hitting the wings or giving me a little more arm movement instead of being so constricted.

Who else from *NSYNC would you like to see do The Masked Singer?

I’d love to see JC do The Masked Singer. I think he’d kill it. He would definitely win if he was on it.

Now that we’ve heard you singing again, will we be getting more music from you now, solo or with anyone else?

I do nostalgic stuff now. I do a Pop 2000 Tour where I go out and sing a couple of the old *NSYNC songs and mess around with that, but as of right now, it’s not in the cards. But with the way I do things, you never know. 'The Masked Singer': Knight on Why It Was Finally Time for Him to Come on the Show

The challenge and how much fun it was, how fun the people there were, the friends that I made on the show, and that’s mostly production, and it was really fun to be so mysterious. Everywhere we went, we had to wear these shields, and you had to wear sleeves all the way down and gloves and didn’t want to give anybody any kind of hints, but it was so neat and interacting with the other costumed characters, not knowing who they are and knowing that they don’t know who you are was a ton of fun.

You mentioned the tour — what else do you have coming up?

This has been a pretty busy year. I did Big Brother. I’ve done a couple little other things, some commercials. The tour has been mostly what I’ve been doing. It’s every weekend, I’ll leave for a night, two nights, sometimes three nights, depending on how many shows they’re doing, and then I get to be home all week with my wife and kids, so it’s perfect.