Jenifer Lewis Reveals She Almost Retired From Acting After ‘black-ish’

After an eight-season run, black-ish came to an end on April 19. And as it turns out, star Jenifer Lewis was ready to retire once it was over. Here, Lewis chats with TV Insider about why her new comedy, I Love That For You, convinced her to ditch her retirement plans.

Lewis stars as Patricia Cochran, the “ice queen” CEO of the home shopping channel SVN, in the workplace comedy. The series, debuting April 29 on Showtime, was created by and stars Vanessa Bayer, with Molly Shannon as the third leading lady. Bayer plays Joanna Gold, a home-shopping obsessed woman from Cleveland, Ohio who gets her dream job as an SVN host. Shannon plays the network’s longest-running star, Jackie Stilton, who takes Joanna under her wing.

Patricia and Jackie have a decades long friendship, but it will be tested in the debut season as Patricia continuously discourages Jackie from talking about her divorce on air. The series opens with a younger version of Joanna undergoing treatment for leukemia. She overcame it and is now a perfectly healthy adult, but in a last-ditch effort to keep her dream job at the end of Episode 1, Joanna lies to Patricia, saying her cancer has come back. And while Joanna will struggle to keep this spiraling lie at bay, Patricia will continue to see it as a money-making narrative for the network.

Vanessa Bayer, Molly Shannon & Jenifer Lewis Preview 'I Love That For You'

The comedy premieres April 29 on Showtime.

Patricia is all about the money and all about keeping her network employees in line. To that end, Lewis delivers no shortage of hilarious name drops and seething reads throughout the season. Lewis says she adores the character and the show and couldn’t be more happy about putting retirement on hold.

“I’m going to be very honest, I was going to retire after black-ish, but nobody will let me,” she says. “Here’s the thing: Molly, Vanessa, and I all came from tragedy, as everybody pretty much. Life is hard, what can I tell you. But what has happened with I Love That For You is this perfect storm has come together. It’s multigenerational as black-ish was.”

Working with former Saturday Night Live stars Bayer and Shannon, Lewis felt she had to “step up” her game coming onto set, and she loved that challenge.

“These ladies are comedic giants, make no mistake,” she continues before teasing about her own comedic prowess. “OK, I didn’t have a problem stepping up to the plate.”

“Listen, my whole chest was lighter when I met these women,” Lewis adds. “They’re so full of love — that’s number one. And believe me, having been in this business so long, it’s the most important piece that we feel safe and create an environment that you can give 2,000 percent, which is what I did. I don’t even know how to give just 100 percent.

“The characters are well developed. Jeremy Beiler and Vanessa Bayer have brought a series that will entertain. You will laugh your a** off, you’ll cry. It’s moving. These characters go in and out with amazing colors and different levels. I’m telling you, I’m having a blast, baby.”

Another new challenge I Love That For You brought was the filming schedule.

“It was a lot of work! We we filmed eight episodes in three months. Black-ish would go a whole year, so I’m very excited about that piece, because then I get to do other things,” she says.

The I Love That For You writing and cast have impressed Lewis to no end. And she reveals she was nearly cast in SNL years before Shannon and Bayer ever made their debuts.

Going Out in Style: The 'Black-ish' Team's Favorite On-Set Stories

Plus, they tease what's ahead for the Johnsons as the final episodes air on ABC.

“This show is abundance! Abundance in that there is not a weak link in it. It’s lightning,” Lewis gushes. “These ladies bringing that Saturday Night Live history, professionalism, the glory of a show that’s lasted what, 93 years? You know, I auditioned for Saturday Night Live and didn’t get it.”

“I had two auditions, two callbacks,” she describes, “but they went with” Danitra Vance, who “played ‘That Black Girl’ on the show, which was so funny.”

In the 1980s, Vance became the second Black woman cast in SNL (to date, there have only been seven). The “That Black Girl” sketch was a parody of the Marlo Thomas series That Girl. While Lewis describes not being cast as “horrible,” she looks back on it with understanding. (She also got her sketch comedy fill not long after, appearing in In Living Color in 1993.)

“The bottom line is, in this business we deal with rejection all the time. I’ve learned what’s yours is yours,” she says, before revealing yet another major series she didn’t book. “I auditioned for Orange is the New Black. I didn’t get it. I thought I did a great audition, but in hindsight, my whole essence didn’t belong on a prison set.”

“I was at black-ish at the most historical lot in Hollywood: Disney,” Lewis continues. “What’s for you is for you. Be patient, be kind, and do the homework. Those are the big things I’ve learned. Bring your best to the set, and this entire [I Love That For You] cast is bringing it.”

Lewis made some key changes to Patricia in I Love That For You, the main one being her name, which was originally Patricia Culkin. “I had to ask the writers, ‘Was she married?’ And they said no. And I said, ‘Well, honey, no Black person’s last name is Culkin. Can we give her another last name?” she quips. Enter Patricia Cochran.

“She’s Johnnie Cochran’s cousin,” Lewis laughs. “All of her friends are Bernie Madoff, Mark Cuban, all the other billionaires, Elon Musk. It’s so much fun.”

Patricia name-drops throughout the entire season, the actor assures, one of the first coming in the pilot in a scene with her assistant, Darcy, played by Las Culturistas co-host Matt Rogers. She says the best name drop will come in Episode 3. And as for Darcy, who equally idolizes and despises Patricia in a hilarious kind of Selina and Gary Veep dynamic, Lewis says she loves him deep down.

“She adores him, but she has to keep him in check so she will always have him at her hip,” she shares.

Lewis’s Patricia makes her fabulous debut in the I Love That For You series premiere, hitting streaming first on April 29 before it airs May 1 on Showtime. The series also stars Paul James, Ayden Mayeri, and Punam Patel. 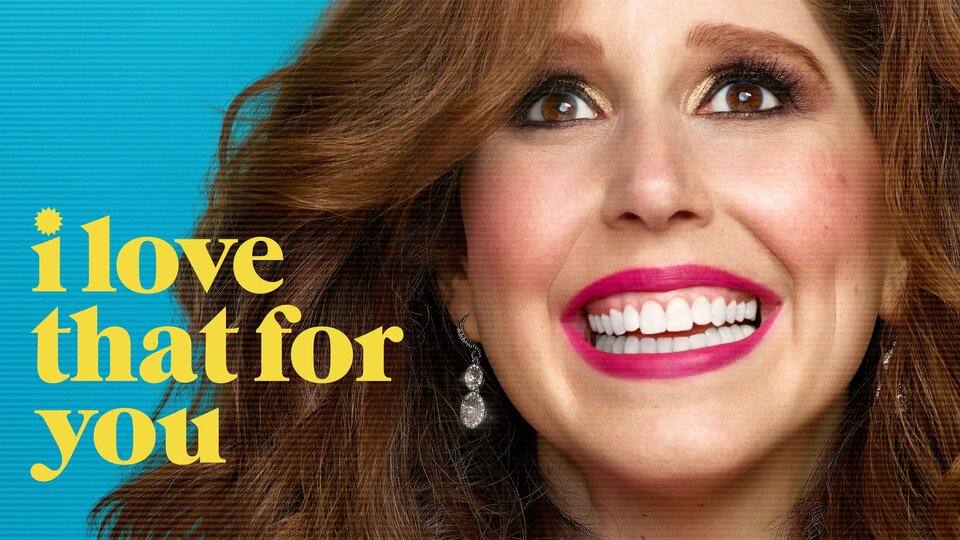