The villainous Space Warriors give a whole new meaning to “putting down roots” in the live-action Netflix adaptation’s fourth installment, which is loosely based on the original’s “Gateway Shuffle.” Again, there are similarities and there are differences, but the Space Warriors translate better to screen than any of the previous antagonists — mostly because the show keeps the intriguing family dynamic among the eco-terrorists alive.

Like previous installments, “Callisto Soul” involves criminals, a bounty and a quest to capture baddies for a few Woolongs. But the way the show arrives at that plot is different this time. Hunter Faye Valetine (Daniella Pineda) tracks a doctor to a ritzy gala, where she demands he get her “Identikit,” which contains her belongings from before she was cryogenically frozen. Faye awoke from cryosleep with no memory of who she was before she was put under, and the woman who claimed to be her mother was only using her to steal her money. It’s a tragic story that lands better in the original, mostly because it’s not delivered through exposition. But the adaptation makes a valiant effort, and Pineda makes it work. 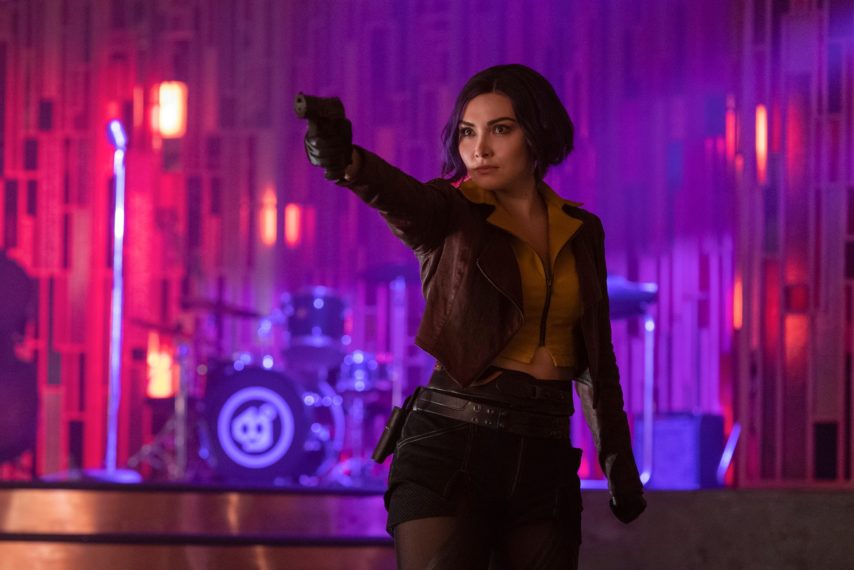 As she blackmails the man into calling her mother, Whitney Haggis Matsumoto, a group of baddies barges onto the scene. They haul the leader of a construction group up to the stage and bluster about how she’s wiping out forests with no regard for the life within them, and they brandish a grenade that’s meant to be used as a threat to inspire her to go back to her employers and get them to quit the construction. Except, the grenade goes off, and the woman is turned into a tree. (Branches erupt out of her like the chest-burster in Alien. It’s pretty graphic.) This is the show’s version of the Space Warriors’ serum, which, in the original, turned people into monkeys.

In the chaos, the scientist is captured and Faye has no way of getting her Identikit. Thankfully, the Bebop boys — Spike Spiegel (John Cho) and Jet Black (Mustafa Shakir) — were in the area, and she talks them into teaming up with her to bring in the Space Warriors’ leader, Maria Murdock — as long as there’s a “60-40 split, going [her] way, of course.” But, Faye betrays them the first chance she gets, stealing Spike’s ship (and corgi Ein) to travel to the planet where the Warriors’ were hiding. Once there, she finds they used their gas on the scientist and he’s now a tree, so her chances of getting the Identikit are growing even slimmer.

Spike and Jet track her, and after that, they team up for real. They go after the Space Warriors and wind up on another planet, where their main objective is — as in the original — to stop the missiles the Warriors are planning to launch. This leads to an extended space-chase sequence where Faye both goes after the Warriors and steals the scientist’s radio from them. She tries to radio Whitney in hopes of getting her Identikit (that doesn’t work). They stop all but one of the missiles, which Maria launches manually; Faye makes a self-sacrificial move to stop it from hitting the planet.

Meanwhile, the Vicious (Alex Hassell) and Julia (Elena Satine) plot continues to plod along. Vicious, as in the anime, wants to take down the Elders and become the leader of the Syndicate. But Julia suggests a coup rather than a full-on attack, convincing Mao (Rachel House) and The Eunuch to join him, which he agrees to. Julia asks club owner Ana (Tamara Tunie) to arrange a sit-down between Vicious and the others. Ana’s concerned that Julia’s getting too involved in the Syndicate’s business, but Julia maintains that this is her way out of the Syndicate.

As the episode ends, Maria winds up being killed by her daughter as she uses a grenade of the human-tree serum on them both (so no bounty for capturing Maria, then). And Faye is just fine, thanks to Jet and Spike — she’s officially part of the Bebop crew.