ABC and People Magazine have teamed up to tell The Story of Soaps, a documentary airing Tuesday, May 19, that takes a look at the impact serialized storytelling, specifically daytime dramas, have had on society and in television.

The roster of interview subjects is impressive and includes Alec Baldwin (ex-Billy, The Doctors; ex-Joshua, Knots Landing), Erika Slezak (ex-Viki, One Life to Live), Bryan Cranston (ex-Douglas, Loving), Susan Lucci (ex-Erica, All My Children), John McCook (Eric, Bold and the Beautiful), John Aniston (Victor, Days of Our Lives), and Susan Sullivan (ex-Lenore, Another World; ex-Maggie, Falcon Crest), among many others.

Producers, naturally, also reached out to Genie Francis, who has played Laura Webber Collins on General Hospital since 1976, to take part in the two-hour program. The Emmy winner brings a unique perspective to the special as GH shot to unprecedented popularity during her first tenure on the show due in no small part to Francis’ talent and popularity. The actress also chatted about her current story on GH in which Laura’s going up against Cyrus Renault (Jeff Kober), an uber-baddie sure to go down in the history books as one of Port Charles’ most memorable villains. Read on for the scoop!

The timing of The Story of Soaps is serendipitous as soaps have always brought people together – something we could use right now!

Genie Francis: I think it’s a nice idea to celebrate the soaps. We have been struggling for an audience a little bit. It’d be nice to get people to appreciate it for the institution that it is, for how long we’ve lasted, and for its roots which go back to radio days.

My dad [the late Ivor Francis] participated in that. He was Ma Perkins’ son Joe on radio [in the serial Ma Perkins]. They have been on for so long and are a reflection or our society. We should be able to find ourselves somewhere on the screen. Soap operas go on for generations. I get letters from fans who started watching with their mothers when they were six-years-old.

During your first run on GH, the show became so popular. You were on the covers of Newsweek, TV Guide Magazine, and People. What are your memories of that time?

At the time, it pretty much went over my head. It was shocking. The bigness of it all was intimidating and scary. It was like being caught in the middle of a tornado. All of a sudden you’re riding around in it. It was lightning in a bottle. When I was going through it, I was trying to keep up, keep dancing, and keep rising to the occasion that was being asked of me at 17, 18…even 16. The whole nation was [watching]. 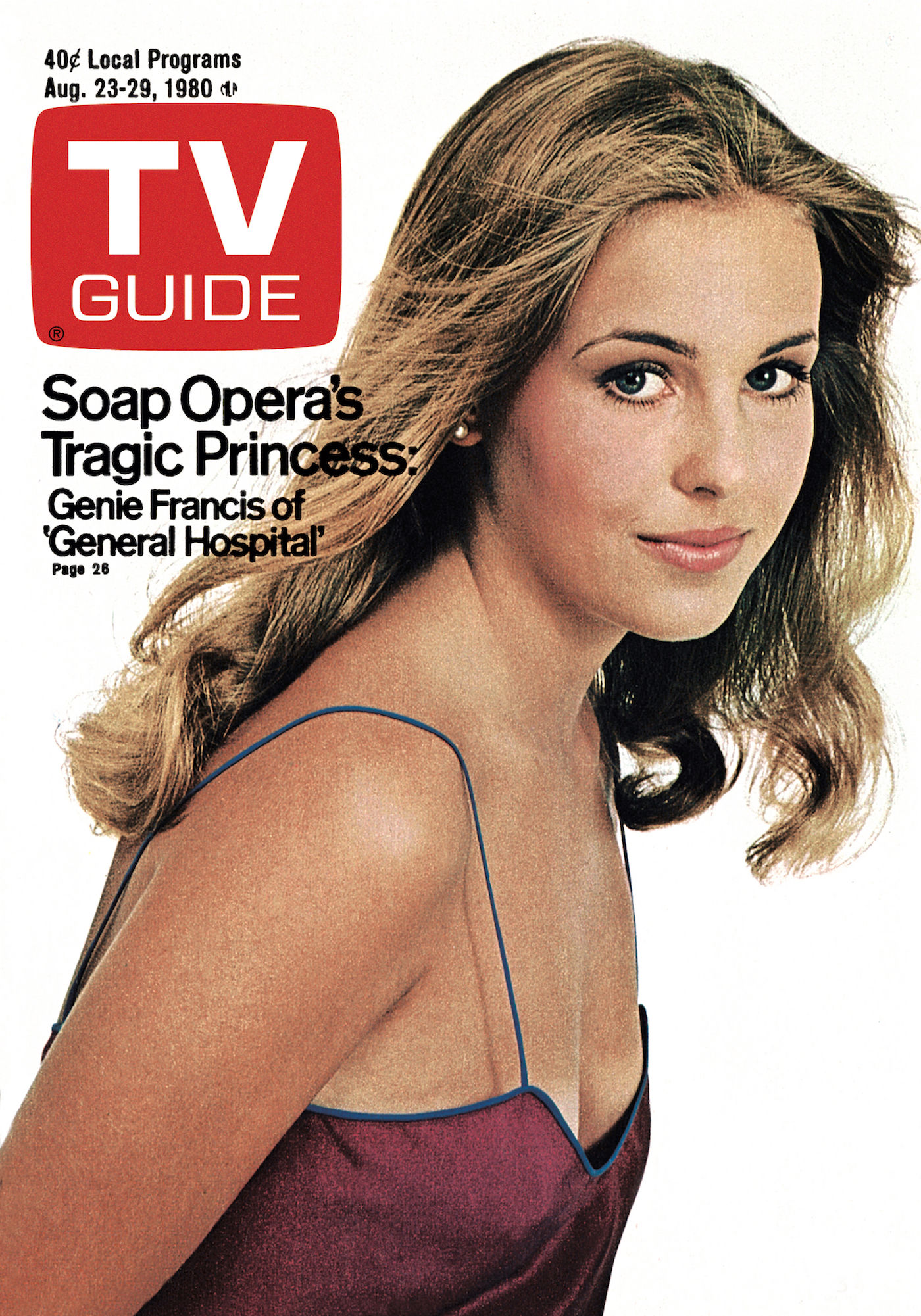 Most of my memories of that time were feeling scared. Then, there were also these super-fun times. Doing the actual work, playing the scenes were an actual joy. [The late, legendary producer] Gloria Monty was a great director and a great story teller so it was great to work for her [and with] Tony [Geary, ex-Luke]. But the bigness and the press of it all and being in a speaking position for the show — that was scary.

It was such a craze. It was like the Beatles. There was a TV Guide Magazine cover called “TV’s Greatest Moments.” One was Princess Diana and Charles’ wedding, the Beatles on The Ed Sullivan Show, the moon landing, and us! When something is that big and that hot for that period of time – it’s an out of body experience!

There will be a focus on the writers in this special. Did you know the scribes who brought GH to No. 1 back in the day – the late Douglas Marland and the late Pat Falken Smith?

I knew Doug Marland. After he left GH, he went on to do another soap in New York – Guiding Light. He was a genius, one of the greats — both he and Agnes Nixon (All My Children). I think we need to grow from within [for the genre’s future writers].

What do you think that shows can do today to recapture the days when everyone from Elizabeth Taylor to high school and college students couldn’t wait to see their soaps?

The world and our lives have changed so much. I think right now is a fantastic opportunity [to get back into soaps], to be honest. People are home in the afternoon and they want a distraction. It’s so incredibly hard. It all really changed with the O.J. [Simpson] trial. People broke the habit there. Also, we became a world in which everyone worked.

We’ve lost a lot of the pioneers, too.

Yes, but we have Frank Valentini (executive producer, GH), who is a wonderful producer. He knows what this about. He came up through the golden years. He knows what he’s doing. That’s what it takes — someone who knows this industry. The show’s on fire right now.

Yes. I do think the show is great right now. The story is great. We were on a really nice roll until [self-quarantining] happened. But we’ll pick it up again. We’ll find new ways to keep it alive. When we come back, we’ll just have to be twice as good! [Laughs]

Jeff Kober (Cyrus) can just stand there in scenes and he commands such a presence. He reminds me of, in a way, George Gaynes, who played mobster Frank Smith back in the day.,

He’s just fantastic. What’s amazing about [Jeff] is that he’s fantastic in one take. He doesn’t come from the soap opera world. Actors who haven’t done a lot of work on a soap can sometimes be very intimidated based on how fast we do things. Jeff has just fit right in. He’s a lovely human [and plays] such a scary [character.]. I love his choices and the secret things that he plays. He’s a wonderful actor and we’re lucky to have him.

When Laura ran for mayor of Port Charles, did she think she’d be in for this much of a battle?

I think she has so much history with the mob and she’s been tormented by that. It’s taken so much from her life and damaged it. It’s almost like she has nothing else to lose. If she does one thing before she dies, she’s going to stand up to it. She feels she’s going to stand up and fight. It’s been loads of fun. I’m lucky I have Jeff to work with. I’m also really grateful that the writers are doing this story. This all falls into the history of the character. It brings us right back to a real Laura.

Any final thoughts on The Story of Soaps?

I’m glad they’re doing this. We could use the boost, frankly. It’s nice to give daytime serials a nod and celebrate them. It’s a pretty incredible part of our society really. And it has been for a long time. I want to keep it going. I want it to stay alive and be well.