Just as Criminal Minds is ending, so might two agents’ time with the BAU. Before the team gets to work looking for an UnSub — there are body parts hanging from trees, enough said — both Prentiss (Paget Brewster) and JJ (A.J. Cook) have to begin thinking about what could come next for them. 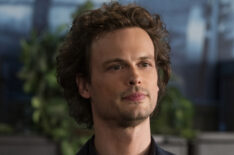 A blast from the past disrupts Reid's life just as he and Max are gearing up for another date.

For Prentiss, it’s a well-deserved promotion. Deputy Director James Barbour (Joseph C. Phillips) reveals she’s on the short list to be the next Director of the FBI. Until she gives him her answer, it’s confidential.

JJ, meanwhile, reveals to Reid (Matthew Gray Gubler) and Garcia (Kirsten Vangsness) that while on a family vacation in New Orleans, she was offered a job in the field office. She’d put her name down years ago for a position there and had forgotten about it. Though she hasn’t said she’ll take it, Garcia makes it her mission to bring everyone in on the secret so they can gang up on her and make sure she stays. And if she does, Prentiss has quite the plan in place for the future of the BAU. While the New Orleans office “would be lucky” to have her, she tells JJ, “If I were to move on from my position, I had you in mind to take over as Unit Chief.” (Remember when JJ was the team’s liaison with the media and local law enforcement? Hasn’t watching her journey been one of the best parts of the series?)

Whatever they decide, these two women are going places, and it’s so wonderful to see that, especially given that brief period of time when both were off the team and the show (JJ at the State Department and Prentiss “dead”).

In addition to teasing where these characters could be going next, “Family Tree” also sets the stage for Rossi (Joe Mantegna) and the team’s hunt for Everett Lynch, a.k.a. the Chameleon (Michael Mosley), to resume in the series finale.

During the case, Rossi chases the UnSub through the woods, and the last time he did that was Lynch. “I damn near died,” he recalls to Matt (Daniel Henney). Rossi admits that he’d been living life with “a sliver of arrogance” regarding PTSD, thinking he was “immune” to it — until Lynch. While the Chameleon has been quiet since killing his daughter (and taking her face), Rossi doubts that he went dormant. Rather, they just haven’t picked up on his activity. Whatever the killer is up to, Rossi has one other question he can’t answer: why did Lynch let him live? The agent is right about one thing: Lynch is up to no good. He’s living under another identity, has inserted himself into another woman’s life, and seems to already be planning her murder. “You have the most remarkable facial structure,” he tells her. “It really is quite lovely. Like you should be preserved under glass forever.” She thinks he’s just flattering her, but oh, if she only knew….