The 1923 series premiere featured the most brutal depiction of the oppression of Indigenous peoples the franchise has ever shown. The plight of Native Americans has always been a major plot point in Taylor Sheridan‘s Western dramas, but 1923 is taking a deeper dive into that plight through the inclusion of a residential boarding school at which Aminah Nieves‘s Teonna Rainwater is a student, and Jennifer Ehle‘s Sister Mary O’Connor is a teacher.

From the years 1819 to 1969, thousands of Native American children were abducted by government agents and placed in government-funded, church-run boarding schools where they were compelled to change their names, starved, and abused when using their native languages, and in many cases, were killed (Canada has a similarly dark history). Nieves’s Teonna was a teenage student at the School for American Indians in Montana in 1923. Sister Mary physically abuses her for answering prompts incorrectly during classes, and a beating of her hands in the series premiere makes Teonna snap and fight back. The fight results in both of them being disciplined through a beating from Father Renaud (Sebastian Roché), the head of the school, showing that the harm inflicted at the federal institution trickles down from those in power. After the beatings, the nuns verbally command the girls through their baths, and viewers see the extent of the cuts on Teonna’s legs inflicted by Father Renaud. Teonna begins to hatch a plan to escape, knowing her friends who “graduated” from the school were likely dead.

Here, Nieves and Ehle break down those harrowing scenes and what it was like to film the beginning of what’s undoubtedly going to be one of 1923‘s most grim plot lines. Aminah, the lives and struggles of Indigenous peoples, are part of every Yellowstone story, but I’d wager this residency school arc will be one of the most harrowing stories we’ve seen yet. Why do you feel this story was important to show in 1923?

Aminah Nieves: Well, for all the reasons. This is a part of history. When I was doing this audition, actually, I went into Wyoming to do my last test, and that week is when the Pope finally apologized to the Indigenous Canadians. That was crazy for, I think, everyone in that room because a lot of people were actually from Canada that was also auditioning.

That’s a huge reason why we do this. [The history of federal residential boarding schools] is something that we’re taught from the moment that we’re born, something that we feel within us. It’s something that lives with us whether we want it to or not. It’s going to live with our children. So doing this, it’s our duty, and it’s very important. I’m so honored to be here, to be telling our stories.

Jennifer, we see a rather brutal side of Sister Mary right away in the premiere, but then we see her also abused by her superior. She tells Teonna they “see each other better now,” but I imagine it will take more for her to really change. How will we see Sister Mary evolve after this premiere?

Jennifer Ehle: As you say, there are these different dynamics of abuse that are happening. We have Sister Mary abusing the students that she’s attempting to force to assimilate, and then we see Sister Mary being abused by the priest who’s in charge of the school. So, we recognize at the end that we both are abused by him, but whether it changes the dynamic between the two of us is something that will unfold. Aminah, who does Teonna see as more of an enemy to her right now? Is it Sister Mary or Father Renaud? I imagine it might be the same for her.

Nieves: I think that question is actually way deeper than what we think it is because, realistically, I think Teonna has a lot of deep compassion for every living being. I don’t think that Teonna loved doing what she did to Sister Mary in Episode 1. She was hurting. That wasn’t an action that she really desired to do, but it was one that she had to do to save herself and everyone in that room. So, who’s the enemy? Religion is the enemy.

Ehle: I’m not apologizing for her, but Sister Mary does believe that she’s doing the best thing for these kids. It’s almost impossible to comprehend that she believes that, but I think she does. 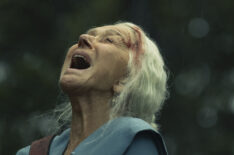 Helen Mirren Explains the Power of Cara Dutton in '1923'

Yes. She seems very stalwart in her beliefs that this is the way to educate people. It’s rather scary.

What was it like for you to film those scenes together? I imagine it was very intense.

Ehle: All the first two scenes you see in Episode 1, we filmed on our first day. It was intense.

Nieves: It was early morning to early morning. I think we both handled it pretty well, and we gave each other space when we needed it.

Ehle: We had two cultural advisors that day. We had Birdie [Real Bird], who’s Crow, and we had [Yellowstone actor] Mo Brings Plenty. Ben Richardson, our director, was great. He was very compassionate and gave us lots of time and space.

Nieves: It was a very intentional set. We made sure to make sure that our boundaries were respected.

Ehle: And we were good with boundaries together as well.