Frank of Ireland star Domhnall Gleeson is one of four new cast members who will star opposite Steve Carell in the upcoming FX limited series The Patient.

Joining Gleeson is Linda Emond (Lodge 49), Laura Niemi (This Is Us), and Andrew Leeds (Zoey’s Extraordinary Playlist). The 10-episode half-hour series is helmed by The Americans duo Joel Fields and Joe Weisberg. Carell will executive produce alongside Chris Long, who will also direct the first two episodes. Kevin Bray and Gwyneth Horder-Payton are also on board as directors.

The Patient is a psychological thriller about a psychotherapist who finds himself being held captive by a serial killer with an unusual request: curb his homicidal urges. As the therapist unravels this man’s mind, he also has to deal with his own repressed troubles, creating a journey that’s just as treacherous as his imprisonment.

Carell will play the psychiatrist, Alexander Strauss, while Gleeson will portray the serial killer. The roles of Emond, Niemi, and Leeds have yet to be revealed.

Gleeson currently stars in the Amazon Prime comedy Frank of Ireland, which he created alongside his brother Brian Gleeson and Michael Moloney. His other recent credits include the HBO comedy-thriller Run and a voice role in the feature film Peter Rabbit 2: The Runaway. He will next be seen in the HBO limited series White House Plumbers, which centers on the masterminds behind the infamous Watergate break-in.

The Patient was given a series order back in October, with the President of FX Entertainment, Eric Schrier, stating, “We are excited that Joe and Joel are back with their next series for FX after the great experience of working with them on six amazing seasons of The Americans.” 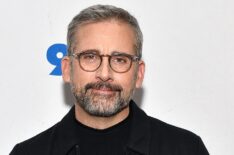 Steve Carell to Lead 'The Patient' Limited Series at FX

The project hails from 'The Americans' duo Joel Fields and Joe Weisberg.

He continued: “Their creative instincts and mastery of plot and character are on display again with The Patient, which will showcase Steve Carell’s remarkable talents as an actor, producer, and creative collaborator.”