Two of the 118’s own are in some serious trouble in TV Insider’s exclusive clip of the November 1 episode, “Brawl in Cell Block 9-1-1.”

In this 9-1-1 episode, the Fox first responder drama sees Captain Bobby Nash (Peter Krause) and the 118 responding to a fire at the prison. As should be no surprise, they then find themselves trapped in a deadly riot. In the clip, Hen (Aisha Hinds) gives Dr. Cochran (Gregg Daniel) a rundown of an inmate’s injuries. He’s been stabbed in his lower abdomen and has lost a lot of blood. He was convulsing, but that’s slowed.

However, there’s a big problem: He’s a guard, not an inmate as they thought. And he was found in the machine room next to who they thought was another prisoner.

“But if this one’s a guard,” Bobby realizes, then “the other one probably is, too,” Hen finishes. So where are the prisoners? In the ambulance with Buck (Oliver Stark) and Eddie (Ryan Guzman)! And that’s especially troublesome considering just how bloody and bruised the inmate in the infirmary is. “Buck, Eddie, come in,” Bobby, who has to have realized the danger his firefighters are in, tries to reach them. “If you can hear me, return to the prison.” 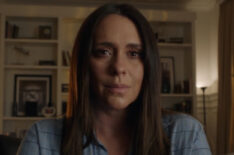 When Buck moves to answer, the “guard” riding in the front with Buck pulls his gun on the firefighter and turns off the radio. Watch Eddie realize what’s going on, see more from the hostage situation, and get a look at Supernatural alum Mark Pellegrino guest starring.