How Does ‘Celebrity Dating Game’ Stack Up to the Original? Michael Bolton Weighs In

To fans of the original Dating Game, the new Celebrity Dating Game will look pretty familiar. It’s still one hopeful contestant quizzing three potential (mystery) suitors, looking for a great date. Of course, in the new version, it’s an established celeb doing the quizzing and picking.

The original, which ran from 1965-99 in various incarnations, did include the likes of Farrah Fawcett, John Ritter and Steven Martin taking part, but that was before each was famous.

The Celebrity Dating Game kicks off on Monday night, hosted by Zooey Deschanel (New Girl) and Grammy-winner Michael Bolton (“How Am I Supposed to Live Without You?”), who also serves as executive producer. And the series starts on a high note, with Bachelorette star and Dancing With the Stars mirror ball champion Hannah Brown as the first celeb looking for love.

“We’re coming on right after The Bachelorette so, I think a lot of that audience will enjoy our show in particular,” Charles Wachter, executive producer of The Celebrity Dating Game (as well as Holey Moley on ABC), tells TV Insider. “We thought giving the audience someone they’re familiar with would be a fun way to kick off the season.”

The exec adds that some celebs signed up just for fun while others are seriously seeking a potential partner. “Just like in life, people come to this show with their own expectations,” Watcher points out. “Some are genuinely looking for love.”

While Celebrity Dating Game incorporates many components of the original — including the humorous interview format, the upbeat Herb Alpert music cues, graphics, and, of course, the couple blowing a kiss to the audience — this is not your grandmother’s Dating Game! From Arnold Schwarzenegger and Farrah Fawcett to a surreal Andy Kaufman, the 9 most amazing 'Dating Game' contestants.

“The funny thing about that is that it wasn’t a big deal,” Wachter says of incorporating LGBTQ+ celebrities. “We weren’t hyper-aware of it. It didn’t feel risky. It just felt this is someone else who’s looking for love. Margaret and Demi will have mixed panels, but we don’t really point that out. We just do it.

“It was refreshing in that it wasn’t a statement piece or about having a sense of social justice,” Wachter adds. “Carson is fantastic. We wanted to put him on the show because we knew it would be a great episode. We put all our talent through that filter asking, ‘Would this person be engaging, relatable, funny, and charismatic?’”

Viewers of the original Dating Game will find that the old set and the new one are almost identical, right down to its dividing wall. “I actually forget that they can’t all see each other,” says Bolton, who says he can pretty quickly suss out the more genuine contestants. “You can tell who the players are, who’ve devised the perfect answers, and which ones are sincere about revealing who they are as people. You almost want to say to the celebrity, go for this person — but you can’t.”

The Celebrity Dating Game set makes room for Bolton and a piano so that the singer can add a bit of levity to the show as he performs some of his greatest hits. He’ll tweak the lyrics to give a clue as to the identity of the celebrity.

“Having the musical component is great because I get to sing the songs I sing until I get to that parody,” Bolton shares. “It’s not easy ‘unlearning’ songs I know so well as I’ve sung them live thousands of times. It’s hard to dig into a line melodically that you’re not used to doing, but some of them ended up being quite easy to sing.”

“Michael is a musical chameleon and genius,” raves Wachter. “He had so much fun working with us on the parody lyrics. He was dead set on delivering a musical performance with a really aggressive wink to the audience.”

The celebrities aren’t told in advance that Bolton will be singing a stylized version of his hits tailored to the stars. “The reaction is ‘Oh, my God, Michael Bolton is singing about me!’” Wachter adds. As for Deschanel, Wachter says, “We needed someone with charisma, who could go in and out of the game without stopping the game.” She’s tasked with giving the celebrity the platform to shine, keeping the show moving and talking to Michael. “It’s a challenging role to keep it simple. Working with Zooey is a blast. We genuinely had a ton of fun doing this show.”

Airing the series during the summer months is ideal, given the program’s lighthearted nature, says Wachter. And just as in the original series, Celebrity Dating Game pushes the envelope with sexual innuendos during the interview segments.

“What people really remember about The Dating Game is when people would blush,” Wachter says. “I like the risqué stuff. It’s what you do when you flirt.

“It is tricky,” he admits. “You want to be risqué but you don’t want to go past a certain line. The challenge was making somebody blush, but keeping the show what we want it to be.” 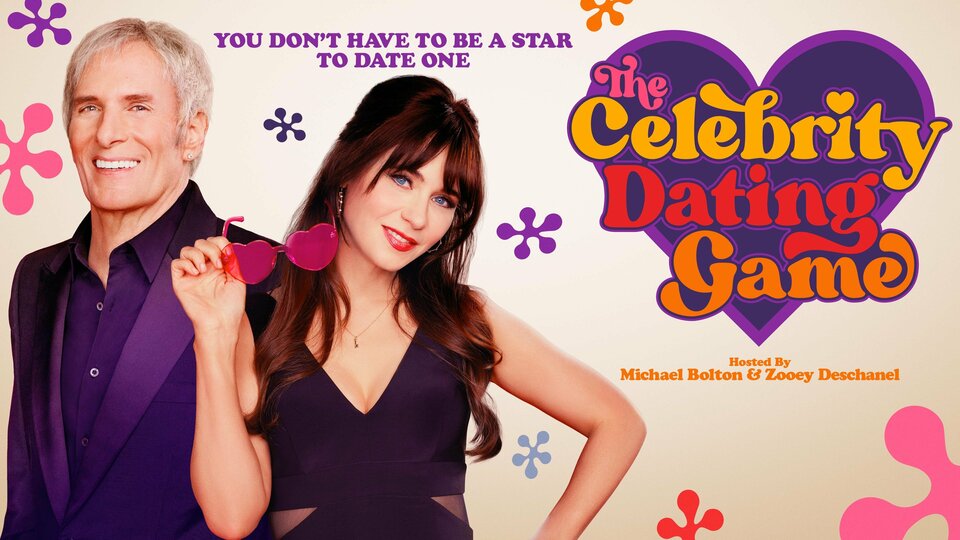 The Celebrity Dating Game where to stream