Bevin Prince, who played Bevin Mirskey on The CW’s hit series One Tree Hill, has broken her silence on the tragic death of her husband, William Friend, who passed away five months ago after being struck by lightning.

“I’m just so proud. I’m so proud that I got to do life with him,” said Prince in an interview with ABC News, which aired during Friday’s (December 9) edition of Good Morning America. “He was one of the funniest people I’ve ever met in my life, by far. He lit up every single room he came into. You never forgot when you met Will Friend.”

Friend was struck by lightning over the July 4th holiday weekend while he and Prince were water boating with family and friends near their home in Wrightsville Beach, North Carolina. In the new interview, Prince recalled how she saw a storm approaching in the distance.

“One Tree Hill” star Bevin Prince gives first on-camera interview after husband Will Friend was killed by lightning.@eriellereshef has her story. pic.twitter.com/vSSLZlcSPx

“There’s like 60 boats out there [on the water], and we look up, and we can see the storm in a distance,” Prince shared. “But we’d been there so many times, and there was no urgency for anyone to get off the water at that time. We were watching it. We were gauging it.”

Bevin explained that she was on a separate boat with her father when the incident happened. “Right before it hit him, he lit a cigar, and he looked at my father, and he said, ‘If we get struck by lightning, Mike, this is where I wanna be.’ And then it happened. And it was instant.”

A police boat arrived on the scene and transferred Friend from his boat to theirs. Deputies performed CPR on Friend until they arrived at the marina, where the EMS took over.

“They rushed over to him, and at the time, a police boat happened to be coming by, so they moved him over to the police boat quickly,” explained Prince. “And from what I’ve heard, you know, spent a lot of time and care trying to resuscitate him.” 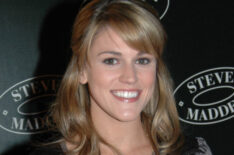 “There was a lot of divinity in it,” Prince said of her husband’s passing. “He was 33 years old. It was July 3, and I believe the exact time that the lightning struck was 3:13 p.m. So knowing that all the resources were there to potentially save him, I have to believe that something bigger beyond me was calling him.”

Prince received an outpouring of love and support when the news first broke about Friend’s death, especially from her former One Tree Hill co-stars, such as Hilarie Burton and Sophia Bush.