A fifth spinoff of Game of Thrones is in the works.

Game of Thrones co-executive producer Bryan Cogman has a fifth prequel series in the works.

The 38-year-old producer and screenwriter is working closely with author George R.R. Martin to write the successor series, according to Entertainment Weekly.

Cogman initially joined Game of Thrones as an assistant to showrunners David Benioff and D.B. Weiss, and has since written several episodes. Some of his episodes include "Kissed by Fire" in Season 3 and "Stormborn" in Season 7.

Game of Thrones is based on Martin's A Song of Ice and Fire book series, and is expected to air its eighth and final season in 2018. Martin announced there are five "successor shows" in development in May, but said it's "very unlikely" all will be picked up to pilot.

"How many pilots will be filmed, and how many series might come out of that, remains to be seen," the writer said. 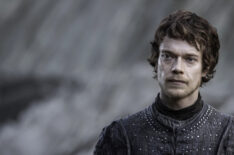 Will Theon Greyjoy be redeemed in Season 8?

"Bryan's series will be an adaptation, and one that will thrill most fans of the books, I think, set during a very exciting period of Westerosi history," he teased. "And I'll be working with him every step of the way; we're going to be co-creating the show."