PricewaterhouseCoopers, the accounting firm that has overseen the Oscars ballot-counting process for 83 years, apologized for an on-air flub that saw La La Land announced as Best Picture ahead of real winner Moonlight.

"We sincerely apologize to Moonlight, La La Land, Warren Beatty, Faye Dunaway and Oscar viewers for the error that was made during the award announcement for Best Picture," the company said in a statement Monday morning. 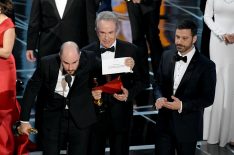 "The presenters had mistakenly been given the wrong category envelope and when discovered, was immediately corrected. We are currently investigating how this could have happened, and deeply regret that this occurred. We appreciate the grace with which the nominees, the Academy, ABC, and Jimmy Kimmel handled the situation," they continued.

The confusion began Sunday as presenter Beatty appeared puzzled while reading the Best Picture envelope. He handed it over to his presenting partner Dunaway, who read La La Land as the winner.

The cast and creative team behind La La Land took the stage and began giving their acceptance speeches before the error was called to light. 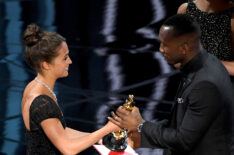 Which film won best picture at the 89th Academy Awards ceremony? Was it La La Land?

"I'm holding the envelope and the award, and I had just given my speech, and there are people on the stage with headsets, and I thought, 'That doesn't seem right,'" Jordan Horowitz, a producer on La La Land described the scene onstage at the Oscars during the Governors Ball in Hollywood, Calfi., to The New York Times.

"They asked to see my envelope, which I haven't opened. Clearly something was wrong. They open my envelope, and it says 'Emma Stone, La La Land.' So clearly something is not right. The guys in headsets were going around with urgency looking for the other envelope -- it just kind of appeared," he continued. "One of the guys opens it, and it says 'Moonlight,' and I took it onstage and went to the microphone and said what I said."

"I opened the envelope and it said 'Emma Stone, La La Land.' That's why I looked at Faye, and at you. I wasn't trying to be funny," Beatty clarified to the audience after the mistake was revealed.

Moonlight writer-director Barry Jenkins, who earlier had won the Oscar for Best Adapted Screenplay, accepted the Best Picture award stating, "Very clearly, even in my dreams, this could not be true. But to hell with dreams. I'm done with it because this is true."

Backstage, Jenkins, when asked by The Hollywood Reporter to explain the moment said, "No explanation; things just happen."

"I will say I saw two cards. I wanted to see the card, and Warren refused to show the card to anybody before he showed it to me. He said, 'Barry Jenkins has to see the card. He needs to know,'" he continued. Who will be the best dress stars at the Academy Awards?